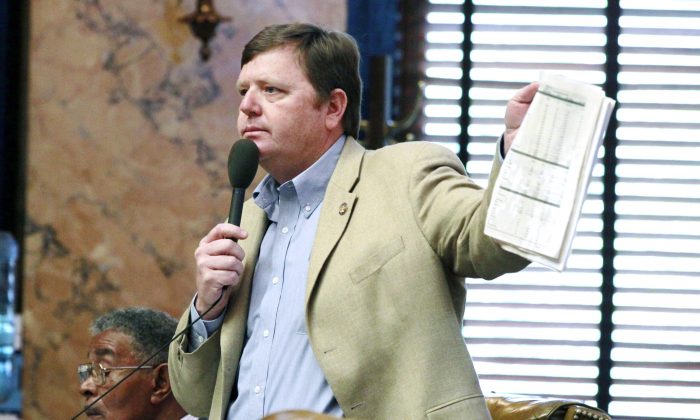 By Luck of the ‘Straw’, Democrat Wins Mississippi House Race

JACKSON, Miss.—A Democrat in Mississippi did not draw the short straw. In fact, Bo Eaton drew the big green straw, giving him the tiebreaker win in a state House election.

When the election ended in a tie Nov. 3, state law said it would be broken by a drawing of lots.

So, on Friday afternoon, Eaton, a 20-year incumbent and Republican challenger Mark Tullos met in the governor’s office near the state Capitol. Eaton pulled a box from a bag containing a long green straw, defeating Tullos.

But the fight may not be over. Tullos, an attorney from Raleigh, said before the drawing that if he lost, he intended to ask the House to seat him in January as the winner because he questions whether votes were counted fairly. Eaton, a farmer from Taylorsville, previously said he would accept the result, no matter what happened.

Certified results show each candidate received 4,589 votes in the district in Smith and Jasper counties in south central Mississippi, a part of the state known for oil wells and watermelon fields.

A Tullos victory would have given the GOP a three-fifths supermajority of 74 seats in the 122-member House, which means, in theory, that Republicans could make decisions about taxes without seeking any help from Democrats. Republicans already have a supermajority in the 52-member state Senate, and Gov. Phil Bryant is Republican.

The National Conference of State Legislatures says 24 states have laws that say a tied legislative election is decided by drawing straws or by flipping a coin.

In Alaska in 2006, a coin flip broke the tie in a Democratic primary for a state House seat. An Alaska Mint medallion was used, with a walrus on the “heads” side and the State of Alaska seal—the fancy crest on paper, not the kind of seal that swims—on the “tails” side. Incumbent Rep. Carl Moses called “heads.” He lost the flip, and the primary, to challenger Bryce Edgmon, who is still in the House today.

In New Mexico, the current Senate minority whip, Republican William Payne of Albuquerque, won his first primary with a coin toss in 1996.

Connecticut rewrote its law in 2007 to eliminate the use of chance, such as a coin toss, to break a tie in a legislative primary. The change came a year after a coin toss decided the winner of a Democratic primary for a state House seat.

A game of chance can be used to decide other types of elections, as well. In a portion of Daviess County, Kentucky, in 2012, a coin toss broke a 21-21 tie in a local liquor election. The alcohol opponents won, and Graham Precinct remained dry.