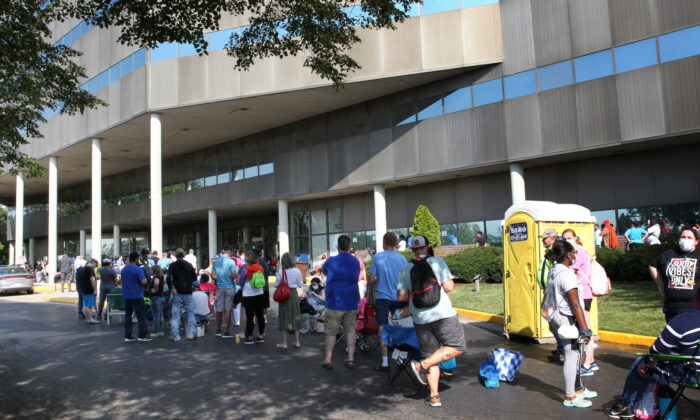 Hundreds of unemployed Kentucky residents wait in long lines outside the Kentucky Career Center for help with their unemployment claims in Frankfort, Ky., on June 19, 2020 (John Sommers II/Getty Images)
By Bryan Jung

Criminals have fraudulently stolen $45.6 billion in unemployment benefits from U.S. government programs meant to assist Americans who lost their jobs during the pandemic.

The federal government started an unemployment aid program in March 2020 during the early days of the pandemic.

The hundreds of billions in pandemic aid immediately attracted criminals, who exploited the federal assistance program.

The scammers applied common tactics, such as the illegal use of Social Security numbers of those not eligible for unemployment insurance, between March 2020 and April 2022, according to a report released on Sept. 22 by the Department of Labor’s Office of the Inspector General (OIG).

These actions resulted in “historic levels of fraud and other improper payments,” reported Larry Turner, the Labor Department’s inspector general.

Unemployment fraud cost the government about $163 billion in overpayments, “with a significant portion attributable to fraud,” testified Turner to Congress.

The department responded in a drafted letter to The Wall Street Journal that it agreed with its inspector general regarding the increase in federal assistance fraud during the pandemic, and said that it is committed to finding new tools and strategies to combat these criminal actions.

The Department of Justice tapped federal prosecutor Kevin Chambers to assist in the investigation of false claims made during the pandemic, including stealing aid from government assistance programs.

The OIG reported “an increase of $29.6 billion in potentially fraudulent payments,” on top of the losses from last summer’s initial report, according to the federal watchdog.

The new figure is more than three times the $16 billion in fraudulent payments that were detected by the authorities in June 2021.

More than half of the fraudulent claims were allegedly by simultaneously filing for billions of dollars in unemployment claims in multiple states.

Others used the identities of deceased persons and federal prisoners, or those ineligible for payments and through the use of suspicious emails that were hard to trace by law enforcement.

In March 2022, federal prosecutors issued indictments for more than 1,000 cases of fraud involving jobless benefits during the pandemic.

The Justice Department announced on Sept. 20 that prosecutors had filed federal charges against 47 defendants for allegedly stealing $250 million from a U.S. government aid program meant to feed children in need during the pandemic.

Aimee Bock, the founder of Feeding Our Future, a Minnesota nonprofit organization, was accused of running the largest COVID-19 aid fraud scheme in the United States, along with 46 accomplices of Somali origin.

The pandemic assistance program gave those who lost their jobs an extra $600 a week in federal aid at first, which was later reduced to $300 a week.

At least 19 percent of unemployment aid was misspent during the pandemic, an increase of around 9 percent before the pandemic, according to a report from the Government Accountability Office in June.

However, the report said that some of the overspending was due to benefits sent to recipients after they had returned to work, rather than outright fraud.

Meanwhile, states across the country also saw a massive surge of unemployment fraud cases of their own after the pandemic hit.

Many state government assistance offices were swamped in early 2021 because of outdated technology that made it difficult to detect and sort through fraudulent claims.

It was also discovered that the federal government allowed more than $1.3 billion to be sent to foreign applicants, which raised concerns that money inadvertently was sent to fund overseas crime syndicates and terrorist organizations.

Congress and the End of the Pandemic Emergency

The scandal is now a bipartisan issue on Capitol Hill, as lawmakers have agreed that state and federal officials must crackdown on fraud in the future.

Sen. Dick Durbin (D-Ill.), for example, called for more oversight of pandemic relief funds, after his own his son was the victim of a $140,000 ID fraud scheme involving a federal PPP loan for a bogus construction company.

“There’s no Durbin construction company,” said Durban to reporters at the Capitol, and that “somebody had stolen his identity.”

“Billions of hard-working Americans’ taxpayer dollars that were meant to help out-of-work Americans instead went to criminals and cheats. This legislation will give the states the incentives and tools necessary to recover this stolen money.”

The report was released as the White House is seeking $22.4 billion in new COVID-19 aid from Congress, but Republicans are opposing this, especially after President Joe Biden declared the pandemic to be “over.”

The Biden administration said that funding is critical to acquire more vaccines, after claiming that 100 million Americans may become infected with a variant of the virus in the fall and winter.

If the pandemic is over, “all of the president’s emergency powers predicated on a pandemic [and] the emergency powers of every governor” should be voided tomorrow, wrote Rep. Thomas Massie (R-Ky.) in a tweet .