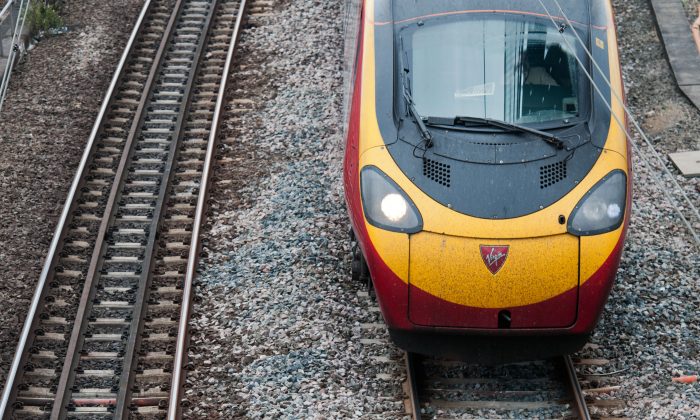 A Virgin train arrives at Euston station in London in this file photo. A 15-year-old girl was 'stranded' after rail staff refused to believe she was under 16. (Will Oliver/AFP/GettyImages)
UK

A British businessman has hit out at a major train company after his 15-year-old daughter wasn’t allowed to board a train home because rail staff didn’t believe she was a child.

A ticket inspector turned her away at the barrier as she went to board the Virgin Trains service to her home in Crewe, northern England.

The inspector said she looked too old for the child ticket she was carrying and had scrawled “NOT A CHILD” across it.

Timpson called Virgin Trains a “disgrace” in an angry tweet on Dec. 12: “Virgin Rail at Euston. Why do you stop a 15 year old girl at the barriers (who has a valid ticket) from traveling home.

“You say she has no ID to prove how old she is. It’s 7pm and she is alone now at the station. When did you have to prove how young you are? You are a disgrace.”

Staff eventually let his daughter board her train home – but only after hundreds of supportive tweets.

Timpson then tweeted: “Good news. Just picking Niamh up from Crewe station. Not a good experience at all of the Virgin Rail ticket inspectors at Euston. Be a kind and caring company please.”

In response, Virgin Trains issued a statement recommending that children who could “look older” should carry proof of age.

A spokeswoman for Virgin Trains told The Telegraph: “Customers under the age of 16 are eligible for a 50 percent discount on fares and we do recommend that if a child looks older then it may be appropriate for proof of age to be carried when traveling.

“We’re sorry for the experience of Mr Timpson and his daughter and we are in touch with them so we can look into this properly and offer a gesture of goodwill.”

Do you think Virgin Trains did the right thing?  Should under-16s be required to carry ID? Comment and share this article!