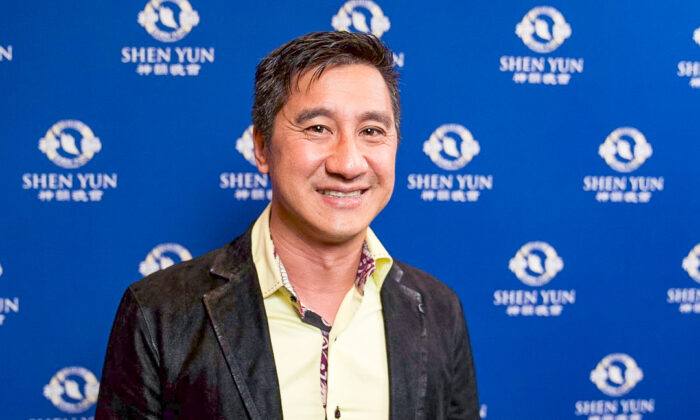 ST. PETERSBURG, Fla.—Steve Huang is a Taiwanese-American businessperson and a new fan of Shen Yun Performing Arts. And, after a one-in-a-million encounter with Shen Yun’s artists in a foreign country, ancient Chinese sages might say that Huang has a special connection with the group that’s written in the stars.

One week before attending New York-based Shen Yun in St. Petersburg, Florida, Huang was traveling in Peru and struck up a conversation with a group of young, English-speaking Chinese people. You’ll never guess who they were.

His encounter is especially unique given the fact that Shen Yun sends seven touring groups around the world, each with its own cast of male and female dancers, and with a full, live orchestra. He didn’t only run into Shen Yun artists—he bumped into the very ones he saw perform one week later.

Huang gave high praise to the work of his new friends and commented on many of the various aspects that go into a Shen Yun performance: the storytelling dances, bel canto vocal performances, and the spiritual essence that is part of the authentic Chinese culture Shen Yun aims to revive.

“I love that [Shen Yun] is being able to keep the culture and keep it alive and continue that kind of—and show the world. I mean, it’s really cool, I mean I love it. [They] did an amazing job to share the culture because it’s not available, you know. I’m from Taiwan originally so we can kind of see different things, but to see this is just unbelievable,” he said.

That’s why Huang felt enthusiasm for Shen Yun’s efforts to restore that ancient civilization in countries like Peru and the United States, where the artists have found artistic freedom.

“I think it’s great, a great message to the world,” Huang said. “People have beliefs and whatnot, and this sharing with the world and letting people know ‘Hey, this is what’s happening.’ The more people know about it the more they can understand it and support it.”

One of the main targets in the Chinese Communist Party’s destruction of the country’s ancient culture is Falun Dafa, a generations-old spiritual discipline that teaches three moral principles—truthfulness, compassion, and tolerance—and five energy-strengthening exercises. Practitioners of this spiritual discipline have been officially targeted for violent persecution by the regime since 1999.

Shen Yun’s artists like the ones Huang met practice this discipline themselves, and say that it enhances their artistic skills and allows them to reach more profound depths of feeling and emotion in their performances.

Some of the roughly 20 vignettes in a Shen Yun performance portray real-life scenes from the persecution now going on in China, as well as the suffering, compassion, and faith that Falun Dafa practitioners endure and exhibit while undergoing these trials.

“They want to get … Falun [Dafa] out there,” Huang said about Shen Yun artist’s stories, “so they restore it back into the whole Chinese culture because it’s lost and it’s been suppressed.”

The final piece of the performance depicts an ancient Chinese legend about the Creator returning to earth and the rewards good people receive if they can overcome the temptations of evil.

Huang recognized the universal values inherent in this story, and even its significance to humanity’s very existence.

“I think it’s great because there is a lot of lost in values in terms of going into money and very materialistic things versus the very spiritual part which is really important. That’s the basis of how we came about and that’s our past. It’s our culture. And I think it’s great to bring that back out into the world, and it’s so important.”

“Oh, I feel really inspired, like what they want to share from the heart,” he said. “Chinese has such—thousands and thousands years of culture and spirituality, and in one fell swoop, went like this and it was gone,” he said, referring to campaigns like China’s Cultural Revolution of the 1960s, aimed at wiping out China’s ancient traditions, including Buddhism and Daoism. “And now, it’s great to bring it back and to see it live and strive and we can bring it back into the culture, all over the world.”

Other pieces in Shen Yun such as the performances by the bel canto singers acknowledge the divine as well as the potential harm that atheism brings.

I think, I mean it’s time—it’s time for people to get back together and bring back the spirituality again.
— Steve Huang

“I think that was pretty cool. It’s awesome!” Huang exclaimed, thinking back to the song’s lyrics in the performance. “I think, I mean it’s time—it’s time for people to get back together and bring back the spirituality again,” he said, adding that he could see “the beauty of divine beings dancing” flow through the performers on stage, which is the translation of “Shen Yun” in English.

“I could see the full essence of the being and the spirit, the divine spirit going through these young amazing dancers. You can see it flowing through them in how they express themselves. I feel it, I feel inspired and it’s really cool,” Huang said.

To Shen Yun’s artistic director and all of the artists, Huang had words of gratitude and encouragement. “Keep doing it. We will be back the next time you guys have another one and continue to share with all your creativity with the rest of the world.”