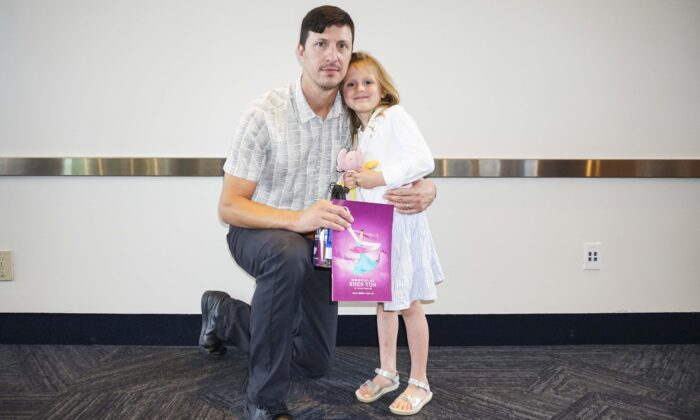 LOUISVILLE, Ky.—Theatergoers who’ve attended the world’s finest display of traditional Chinese dance and music, Shen Yun Performing Arts, will often tell you that their horizons have been expanded. For Matt Argo, the owner of several businesses, Shen Yun has given him a desire to learn more about China’s history.

Argo attended Shen Yun in Louisville with his daughter, Silvia, who is a first-grade student. Shen Yun has seven companies that, in normal times, tour the world simultaneously. During the pandemic, Shen Yun is still touring the “Land of the Free,” and graced theatergoers at the Kentucky Center, Whitney Hall, on Oct. 9.

Shen Yun’s mission is to revive China’s 5,000 years of culture and history through storytelling illustrated through its classical, folk, and ethnic dancing. The stories presented relate to ancient legends, historical events, as well as tales of virtue.

“We absolutely loved it, it was beautiful,” Argo said, adding that Silvia particularly enjoyed the way the characters in Shen Yun’s stories jumped in and out from its digital backdrop display.

It made me more interested in Chinese history.
— Matt Argo

“[The backdrops were] just so creative and the story was really amazing,” he said. “It made me more interested in Chinese history.”

The ancient Chinese believed that their creative arts—dance, music, and painting—were bestowed upon the nation as gifts from divine beings. Unbeknownst to many, modern-day gymnastics evolved from Chinese traditional dance.

“The dancing was phenomenal,” Argo said. “It was really cool to see how [the dancers] move and … whenever they flip, it’s almost like they’re suspended in space. They go up really fast and then, they slow down and come down really softly. But all the movements are really delicate, and we loved it.”