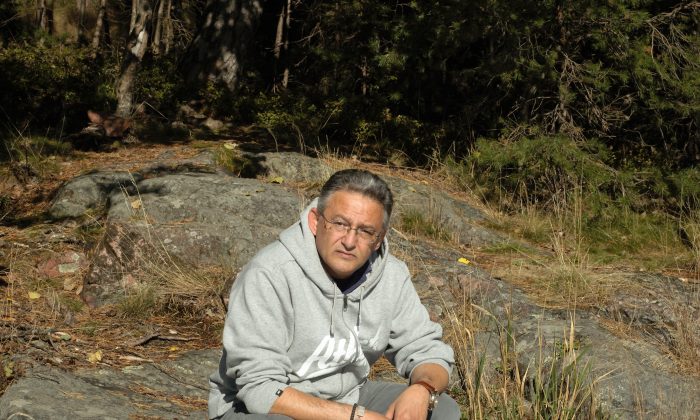 Geroge Karimi pictured in Värmdö, after his transfer to Sweden in 2015. (Courtesy of George Karimi)
China

Businessman Imprisoned for Life in China Is Released in Sweden

When Swedish businessman George Karimi was released from prison recently, he had spent 12 years in captivity—seven in China and over five in Sweden. “It’s strange, but I don’t feel anything,” Karimi said before his release on Nov. 19. “Let me put it this way: The first night in the detention center in China, I looked around that tiny room and thought ‘this is it, my life is over.’ I think it ended that day.”

Karimi, a Swede of Armenian origin, was an importer and exporter in the clothing and food industry and traveled regularly between Sweden and China. In 2003, he went to visit a friend he hadn’t seen for several days. It was during the SARS epidemic, and Karimi was worried that the friend might have been ill.

He arrived at the friend’s apartment in Beijing to find plainclothes police waiting for him. They took him to a customs building, informing him that his friend, Milap, had committed a crime (they didn’t say what crime) and that Karimi would be detained until the investigation was concluded. He spent the night locked in a dirty cell, about 7 feet by 7 feet, with five other detainees.

“It’s hell in there,” Karimi said in an interview. “If you get out alive, it’s a miracle.”

Each day was regimented. Inmates would eat, wash their dishes, and go to the bathroom all in their tiny cells. They were forced to sit or squat nearly all the time, and Karimi developed back problems as a result. Every cell had a monitor who kept others in line, beating disobedient detainees or directing others to do so. At the end of the day, the cell boss would make a report to the guards.

A Bag of Counterfeit Cash

Karimi was eventually charged with printing and selling counterfeit American dollar bills, after police claimed they found a bag full of false bills—to the value of $534,000—in Karimi’s apartment. Karimi maintains that the bag belonged to his friend Milap, and was left in his apartment when the latter went back to his native India for a visit. Milap said it contained simple clothing and spices.

In August 2004, while Karimi was languishing in detention at the Beijing Qichu Detention Center, the main suspect, Milap, was suddenly deported back to India for health reasons. (He was suffering from AIDS.) With Milap gone and unable to be prosecuted, the authorities accused Karimi of being the head of a counterfeiting ring.

About a month after the deportation, Milap sent a letter to Karimi’s wife, asking her forgiveness. In the letter, he said that he’d been tortured to frame Karimi, and that Karimi was entirely innocent. The only reason Karimi was in detention, the letter said, was because he happened to arrive at Milap’s apartment that day.

Karimi was sentenced to life imprisonment on Dec. 19, 2005, at the Beijing Second Intermediate People’s Court. The judge blocked Milap’s affidavit, and as the main suspect he was neither called in for questioning nor charged. The Swedish Embassy told the Swedish Foreign Ministry about the obvious procedural flaws in the case, and Karimi appealed to the Supreme Court.

Karimi says that the time in the detention center—over a year by then—was a nightmare, and that he had done well simply to survive long enough to make it to prison.

‘It Could Happen to You’

Three factors determine the treatment of foreign nationals in detention, Karimi says: their nationality, their contacts in China, and the concern evinced by their embassy. All three factors were in Karimi’s favor, which meant police didn’t dare to physically torture him, lest embassy visitors see the marks. But they settled for mental domination.

Those less lucky were regularly beaten, had their fingers broken, and were tied in stress positions for days. Electric batons were mostly reserved for Chinese detainees. Karimi says he heard numerous cases of Chinese detainees dying of torture, and that they were denied access to family members or a lawyer.

Among the Chinese expressions Karimi picked up in custody, “kill the chicken to scare the monkey”—meaning to make an example of one party in order to warn others—left a particularly deep impression on him. This came in the form of cries of pain from screaming victims as they were tortured and beaten by prison guards.

“The guards wanted to let you know it could happen to you, too,” he said.

Several days a week the prisoners were made to watch state propaganda on television, all day. Anyone who took his eyes off the screen was beaten. Among the content of these productions, the most common footage was recordings of executions—handed out “like chocolate” in China, Karimi remarked—as well as crying prisoners and shots of devastated family members.

“That was not for entertainment. It was mental torture,” Karimi said. “The video would just keep playing, over and over. It made me mentally ill.”

On other days, they weren’t allowed to move, except during meals, or they were forced to sit or stand still depending on the whims of the officer in charge. Whoever moved was beaten. As Karimi was not to be beaten, the others were punished collectively if he happened to move.

“You put some 19-year-old brat in a police uniform, and he thinks he’s God, just because he gets to boss other people around,” Karimi said. “He says that everyone has to stand up for five hours, or until dark, and that’s what they have to do.”

There were prisoners of conscience in the detention center as well, such as Uyghurs, Tibetans, and Falun Gong practitioners. The latter became a source of inspiration for Karimi, he says.

“I really respected the Falun Gong practitioners,” he said. “They weren’t like the other Chinese, who just gave up or acted like ‘go on, do whatever you want to me.’ I often heard them dare to complain, protest, and go on hunger strikes. They sat in a particular way. Any Chinese in the detention center who sat like that would be branded as a Falun Gong practitioner, and then he would be done for.”

Karimi said that killers and drug dealers were treated better than prisoners of conscience. Tibetans, Uyghurs, and Falun Gong practitioners were subjected to the worst torture. They were doomed, he said.

In Sweden, Karimi was placed in the Kumla prison facility, which is one of Sweden’s three high-security prisons, typically reserved for violent criminals. For a long time, he was not allowed to communicate with his friends or Amnesty International.

When his lawyer at the time threatened to go to the media, Karimi was transferred to a prison with a lower security class. In 2011, he had his first leave.

In 2014, it was revealed that Karimi had been under illegal surveillance during his leaves by, among others, the Swedish National Police Board. In 2015, the Swedish Chancellor of Justice awarded Karimi damages and criticized the Swedish police for mishandling personal information about Karimi.

Karimi thinks the Swedish government is aware that he was mistreated in China, but that it has tried to bury the matter in order not to upset the country’s relations with China.

“You can’t say that I’m going to be a free person,” Karimi said about his upcoming release. “I won’t get back the 12 years of my life that I have lost. But I can reveal a lot of things, and I want justice for what they’ve done to me. Since they’re still watching me, I don’t think I’ll be free on Nov. 19. I’m 100 percent sure they’ll put me under surveillance,” he said.

In the beginning of 2016, Karimi’s book “Life Sentence in China” will be published in English. The book deals with his experiences as a detainee and prisoner in China.

“Twelve years is a long time. I need to rest a bit,” he said. “I’ve set aside a month for just thinking about what I want to do, or what I can do. I have to start my life all over again.”