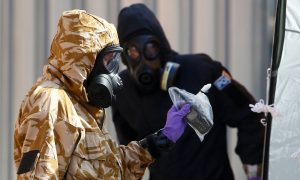 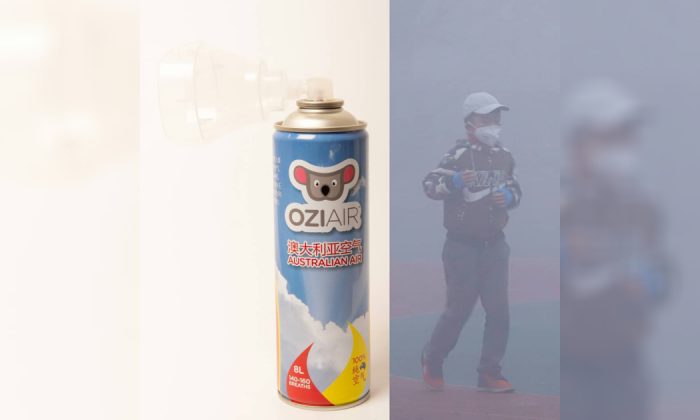 A can of Ozi Air containing what is touted to be fresh Outback Australian air (L) and a person walking through thick smog in Asia on March 13, 2019. (Courtesy of Ozi Air)
Social Issues

Heavy pollution in China is forcing shoppers to buy bottled air from Australia to improve their wellbeing and reduce the chance of premature death from air pollution.

Each year, 7 million people die prematurely across the world from air pollution, the United Nations Environment Programme said, and about 4 million of these deaths occur in the Asia-Pacific region.

Yes, really. He has bottled air and will sell it direct to China.
“Ozi Air is an innovative product that is uniquely Australian that gives Chinese the opportunity to enjoy the benefit of pure fresh clean air.”https://t.co/RTit75lnv6

Buyers simply attach a face mask at the top of the metal can and the contents can deliver between 140 and 160 breaths—about nine to 10 minutes of breathing relief.

Founder Joe Duchiera, 36, confirmed that the air is collected from a secret location in South Australia that is “off the beaten track and closed to the public.”

“It’s a bit of a secret, we remotely go out bush,” he told News Limited. “We have air quality measuring devices we use to test the air and make sure we get the purest air we can.”

Duchiera’s product had not publicly launched at the time of publication but he is so confident there was a market for bottled air in China that he has already invested hundreds of thousands of his own money into the business.

South Australian Joe Duchiera is about to release his product, Ozi Air, to customers from China.

The 36-year-old has poured hundreds of thousands of dollars of his own money into his business dream of selling pure South Australian outback air in a can >> https://t.co/JLUJRp6ClZ

He claims the can and mask are both made from recyclable materials and it is a “completely Australian-owned and made” product.

So far there has been interest from customers based in China, Hong Kong, and South Korea. Brand incubation company Reach China helped Duchiera find the international buyers.

The $24 cans claim to improve fitness, reduce anxiety and assist in learning. https://t.co/ptqP2qUDDr

Reach China expects the product to sell well if targeted towards female millennial shoppers who are visiting Australia from China.

“It will also serve as a unique souvenir for Chinese visiting Australia—they will be able to buy pure fresh Australian air and take it home to China as a wonderful memento of Australia,” Reach China CEO Dr. Mathew McDougall told News Limited. “It will bring relief to Chinese dealing with pollution.”

Ozi Air of #Adelaide to sell ‘pure air’ from our outback to Chinahttps://t.co/jVNN8nNbjx

Other companies have started bottling air for sale including Sydney-based Green & Clean, which collects air from well-known tourist destinations like Sydney’s Bondi Beach and the Blue Mountains.

“Where you have a market is the souvenirs market … people can take something home,” Green & Clean Co-founder Theo Ruygrok said.

Duchiera claims his product is regularly tested to ensure it complies with Australia/New Zealand diving standards, rules that govern the quality of bottled air for human consumption, such as oxygen for scuba diving.

“Once we get the air, we then send it off for independent laboratory testing,” he said.

The Royal Australian College of General Practitioners (RACGP) cautions patients against relying on any product that has no supporting scientific medical evidence, according to News Limited. RACGP President Dr. Harry Nespolon said people considering the likely benefits of such a product should be aware they are using it at their own risk.

Duchiera defends Ozi Air by saying it was never designed to replace medical aids or prescriptions. He said it could help people in heavily polluted countries like China.