Businessman and Author Humbled by Experience of Watching Shen Yun 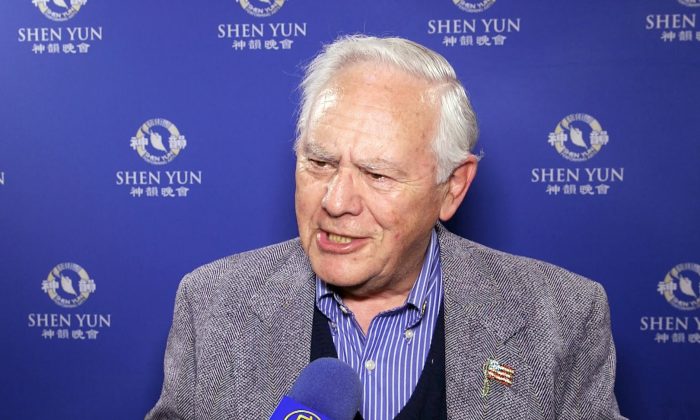 “It’s pretty close to what I expected,” Batson said after watching the company perform at The Granada Theatre in Santa Barbara, California on March 30.

Batson was blown away by the coordination both between the individual dancers on stage, and between the dancers and the orchestra below.

“It must be very difficult to choreograph that kind of movement constant with so many people. And it just flows with the music in unison,” he said.

“It comes all together as a beautifully structured piece of artistic work.”

But it wasn’t just the artistry that drew his attention, the history conveyed through the dances and songs was the most important aspect of the performance for Batson.

“It covers thousands of years, and it gives an insight as to the dress of the time and things of that nature,” he said.

“You can just feel the emotion and the beauty involved.”

“And to learn about the culture of thousands of years is very humbling.”

The stories depicted by Shen Yun contain values and beliefs lying at the foundation of China’s ancient civilization. Such values and ideas are firmly rooted in a belief in the divine, as embodied in the teachings of Buddhism, Taoism, and Confucianism, which guided Chinese people for thousands of years up until the Chinese communist regime seized power seven decades ago.

Traditionally, Chinese people believed in principles such as righteousness, propriety, trustworthiness, and benevolence, and ultimately to live in harmony with their fellow man, Heaven, and Earth.

Batson was particularly moved by Shen Yun’s mission to transmit to modern audiences the wisdom accumulated from China’s ancient culture.

“It makes me proud to know that there are people throughout the world that care about goodness, and want to continue the history of the race and what they have done, so that they don’t forget who they are and where they come from,” he said.

The importance of this task is heightened given what could happen if people’s links to their roots are severed, Batson said.

“But when you know what your forefathers and your parents and your people have done, you can take pride in that and know that you can contribute to what that is all about.”

All in all, Batson was so struck by the performance that he said he “would not have missed it for the world.”

Touched by the experience, he had a few words to the performers.

“I say thank you very much, to all of the performers, and to their dedication and the hard work that they go about.”

“They work for a long period of time for this kind of perfection.”

“I feel humbled to be having given the privilege of coming and observing it.”

Batson sent his best wishes for the company going forward.

“My most ardent hope is that your organization continues and passes that information on to your people who aren’t able to see and hear it.”