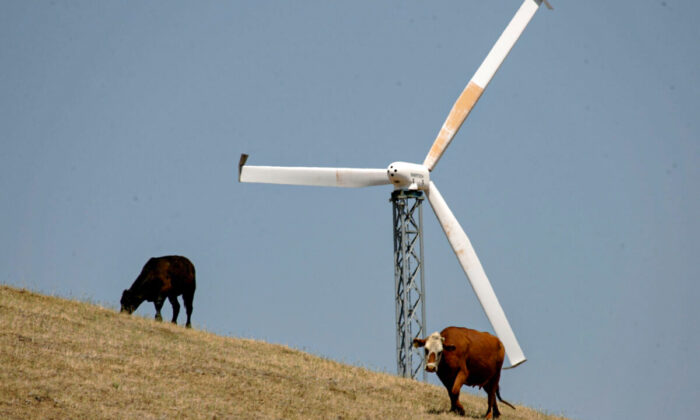 Cows are seen grazing near a wind turbine at the Altamont Pass wind farm in Livermore, California on May 16, 2007. (Justin Sullivan/Getty Images)
Australia

Businesses have yet to fully grasp the risks of relying on Chinese supply chains, an issue that will become more critical as the net-zero push sets to increase Australia’s reliance on China, according to energy lawyer Scott Schlink.

Schlink, a partner at Holding Redlich, said that in the “foreseeable future,” Australia would continue to rely on overseas manufacturers for renewable energy components in solar panels, wind turbines, and batteries.

“Production in South Korea and China is a significant part of that import,” he told The Epoch Times.

“A big part of the decision [with manufacturing] comes down simply to the cost per unit of electricity—who’s got the cheapest cost of energy. And so, it quickly becomes a pricing decision, and that puts a huge amount of strain on those companies to aggressively minimise their supply chain costs.

“I’d like to see more Australian industry for manufacturing, but my cynicism comes from the fact that there have been companies trying to increase local content for a decade or two in the turbine manufacturing space, and they haven’t necessarily had a lot of success.”

For a country like Australia, with a smaller population and manufacturing base, a local renewable industry is challenging to sustain.

“For example, to build gearboxes—we don’t necessarily have the large supply network around that as some other countries have to facilitate manufacturing,” Schlink said.

Manufacturing wind turbine blades can also prove quite costly as it requires the creation of composite materials comprising steel, fibreglass, iron, and copper.

“There’s also a geographical issue, so for example, if that manufacturer is in Australia, how viable is it for them to be able to economically export to the European, Asian markets, and American markets where there is a huge amount of demand as well?”

In fact, Sheffield Hallam University in the United Kingdom found that Xinjiang Province in China’s west was the source of 45 percent of the world’s polysilicon—95 percent of solar modules need this material.

Self-Reliance a Long Way Off

Another major concern for the Australian Labor government and green energy advocates should be reconciling the increased support for renewable energy projects and the push for sovereign manufacturing.

“Even when I’m advising on deals, I struggle to quantify it. There are a number of the major businesses with significant manufacturing occurring in China as part of their supply chains.

He said some companies with manufacturing bases across several jurisdictions were beginning to look at diversification.

Under the Albanese-led Labor government, Australia will increase its emissions reduction target from 26-28 percent by 2030, to 43 percent.

The government has also entered the Minerals Security Partnership with the United States, Canada, Finland, France, Germany, Japan, the Republic of Korea, Sweden, the United Kingdom and the European Commission. Australia will look to supply critical and rare earth minerals to U.S. manufacturers to fuel the net-zero push.

“The partnership seeks to catalyse public and private investment for mining, processing and recycling projects that adhere to the highest environmental, social and governance (ESG) standards,” according to Don Farrell, minister for trade.

Yet realistically, Schlink said there was a “long way to go” before renewable energy would become the dominant supplier of power in Australia.

“I think all of the manufacturers are going to struggle to get enough supply into the market over the next decade,” he said. “The amount of non-fossil fuel supplies need to increase, yet at the same time, demand for electricity is also spiking up considerably.”

“There’s going to be a continued strain on electricity production over the next couple of decades.”

Australia’s electricity demands will double by 2050, according to the Australian Energy Market Operator.