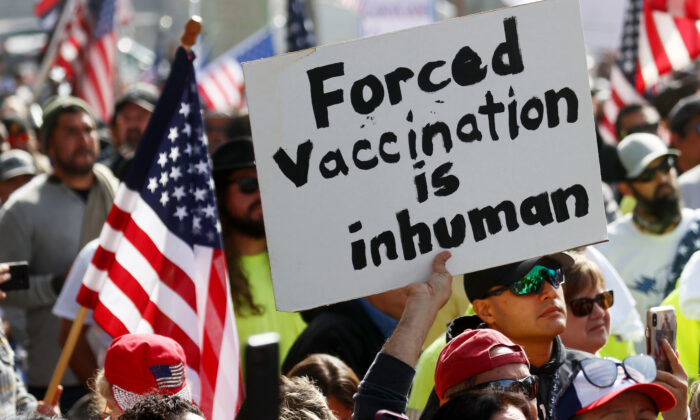 Businesses welcomed a U.S. Supreme Court ruling Thursday that ordered a temporary stay on an economy-wide federal requirement that forced them to choose between hefty fines and protecting the personal health care rights of their employees.

The U.S. Supreme Court blocked President Joe Biden’s mandate that all private sector employers with at least 100 workers ensure their employees are vaccinated against center or be tested weekly. The mandate was enacted through the Occupational Safety and Health Administration (OSHA) and would have placed hefty fines on businesses that refused to comply. That mandate was expected to affect 84 million workers nationwide.

The court also allowed the vaccine mandate to stand for health-care workers at federally funded facilities.

“Many States, businesses, and nonprofit organizations challenged OSHA’s rule in Courts of Appeals across the country,” the court’s ruling said. “The Fifth Circuit initially entered a stay. But when the cases were consolidated before the Sixth Circuit, that court lifted the stay and allowed OSHA’s rule to take effect. Applicants now seek emergency relief from this Court, arguing that OSHA’s mandate exceeds its statutory authority and is otherwise unlawful.

“Agreeing that applicants are likely to prevail, we grant their applications and stay the rule,” the court said, tipping its hand on its upcoming final ruling.

The private sector ruling came on a 6–3 vote. Chief Justice John Roberts along with Justice Brett Kavanaugh joined the court’s three left-leaning justices in a 5–4 decision to uphold the health care workers mandate.

The private sector ruling was welcome news for businesses, who felt the administrative burden of enforcing the mandate as well as the expected loss of unvaccinated workers in the middle of a year-long labor shortage.

Those economic concerns were heightened just hours before the Supreme Court issued its ruling when the Department of Labor released more inflation data showing producer prices rose at the highest rate on record. Consumer prices have risen at the highest levels in decades, according to federal data.

NFIB, a leading challenger in this case, welcomed the court’s decision, emphasizing that businesses needed the relief and saying they are “optimistic” about the court’s final ruling.

“Today’s decision is welcome relief for America’s small businesses, who are still trying to get their business back on track since the beginning of the pandemic,” Harned said after the ruling. “As small businesses try to recover after almost two years of significant business disruptions, the last thing they need is a mandate that would cause more business challenges. We are pleased the Supreme Court stopped the rule from taking effect while the courts consider whether or not it is legal. We are optimistic that the courts will ultimately agree with us that OSHA does not have the emergency authority to regulate the entire American workforce.”

Recent polling showed that the majority of Americans did not favor Biden’s private sector mandate.

“We have done more polling on the vaccine mandates than any other organization [Convention of States/Trafalgar Group] and it’s unmistakably clear that a majority of voters are against Biden’s mandate, they never wanted people to lose their jobs over this–which has tragically already happened–and they support various measures to block it,” Convention of States President Mark Meckler said in a statement. “From Governors stepping up to the current bill in Congress to block the mandate, no matter what we polled, voters want this unconstitutional mandate stopped. After seeing horrifying moments from ignorant Justices during oral arguments last week, it’s encouraging to see SCOTUS came down on the right the side of Constitutional freedoms.”

The court’s ruling went on to point out that such a broad, sweeping mandate was unprecedented.

“OSHA has never before imposed such a mandate,” the ruling reads. “Nor has Congress. Indeed, although Congress has enacted significant legislation addressing the COVID–19 pandemic, it has declined to enact any measure similar to what OSHA has promulgated here.”

President Joe Biden, whose administration argued the mandate was necessary to protect workers, said he was disappointed with the decision.

“I am disappointed that the Supreme Court has chosen to block common-sense life-saving requirements fortribune employees at large businesses that were grounded squarely in both science and the law,” Biden said. “The Court has ruled that my administration cannot use the authority granted to it by Congress to require this measure, but that does not stop me from using my voice as president to advocate for employers to do the right thing to protect Americans’ health and economy.”

But the ruling gave reason for optimism to groups challenging federal vaccine requirements in other cases.

“We’re pleased that the Supreme Court is preventing this unconstitutional mandate from going into effect, but we hope the court will strike it down to avoid a Constitutional crisis,” said Kelly Shackelford, president, CEO, and chief counsel for First Liberty Institute. “President Biden is not a king. He cannot federalize the nation’s workforce and force employers to violate the conscience rights of their employees. We will continue to fight on behalf of our clients and the American people to protect them from this illegal, dangerous expansion of government power.”

“Americans have lost too much to this disease already—all of us want this pandemic to end—but it is critical that we do not lose our Constitution, too,” Yost said. “Today’s ruling protects our individual rights and states’ rights to pursue the solutions that work best for their citizens.”