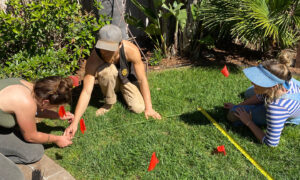 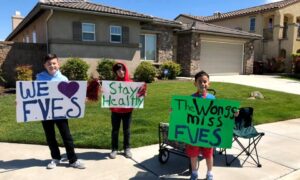 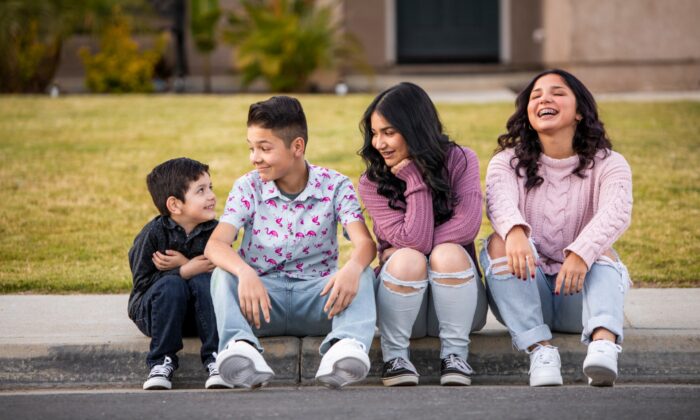 As revenue streams slow to a trickle, some business owners in Bakersfield, California, are showing their resilience. They are finding ways to weather the economic drought and to support their community.

The couple wore “Mr.” and “Mrs.” surgical masks in the photos; they posed with antibacterial soap and Charmin. Their wedding photos went viral.

Hollar’s clients, Andrea and Jeremy Rathbone, had realized their April 4 wedding wasn’t going to happen as planned, and hired Hollar with only one day’s notice as they made their nuptial vows early.

After the shoot, the couple enjoyed wedded bliss in quarantine, but Hollar was in a panic. The honeymoon was over for her business, despite the media spotlight.

“I had 11 couples reschedule their weddings, which puts me back $40,000 in delayed income, because now everything is moved further out. This is when I’m usually slammed, when I make most of my money,” Hollar told The Epoch Times. “And on top of that, I photograph graduates a lot, and everybody’s on pause. This is my busiest time, and everything has come to a screeching halt.”

Fortunately, most of her clients have only postponed their weddings and will retain her services when they eventually tie the knot; in the meantime, Hollar has to find a way to make ends meet.

The next week, while she was at home catching up on photo editing, she discovered some photographers were doing front-porch portrait sessions, and she mentioned the trend to her husband.

“My husband was saying we haven’t even met our neighbors. We’ve lived in the same neighborhood for four years and, for one reason or another, we haven’t had an opportunity to meet our neighbors,” she said. So, the couple decided to go on an evening stroll, and hang some flyers on their neighbors’ door handles.

“I didn’t ask for money or anything,” Hollar said. “We went out that evening and we left little notes on the door. We knocked and walked away. And, [the notes] just said, ‘Hey neighbor, we’ve lived here for four years. I’m a portrait photographer, and I’m going a little stir-crazy. I need to do something creative, so if you’re interested I’m going to be offering free five-minute family portrait sessions from your front door or your front yard. And, I will stay across the street, or in the middle of the street.’”

She had 16 families accept her offer.

“I was pleasantly surprised to see people’s reactions,” she said. “So, we just walked around the neighborhood, and I took pictures. They sat on the sidewalk or they were at the front door. Some of them even got dressed up, and some were having fun with it, like having their kids pose with their gaming consoles and headphones.”

But, not everyone was feeling so warm and fuzzy about the front-porch sessions.

“There was one neighbor who opened her door and just stared at us,” Hollar said. “That’s OK. There’s so much misinformation out there about the virus right now that people don’t even know if it’s safe to take a piece of paper off their door. You can’t focus on those people.”

When Hollar called her local credit union about applying for federal relief, under the Coronavirus Aid, Relief and Economic Security (CARES) Act, “they didn’t know anything about it,” she said.

So, she contacted another photographer who helped her fill out the forms and apply for aid.

Hollar is thankful for the way Bakersfield businesses and the community have helped support each other and offer hope during the pandemic.

“Personally, I hope people continue to support local [businesses] after all this is done, because I think people see the need now,” she said. “It’s unfortunate that it took something like this for people to see how important it is to support your local community and economy.”

Dot x Ott, a restaurant and fresh food market in Bakersfield, had to lay off about 85 percent of its employees, including kitchen staff, cashiers, and servers, when the state ordered the shutdown of dine-in service last month.

Jessie Blackwell, who co-owns the business with her husband, Jeremy, said the remaining skeleton crew has been working hard, despite the disruption in their work schedules.

“We just kept the core group. We had no idea if this would work or if we will be able to keep the doors open, and we’re still not sure. So, we’re hanging on as long as we can,” she said. “The employees have been great. They’ve been working hard. We’ve adjusted hours. We’ve just had to. We kind of just have to adapt every single day or week.”

Before the COVID-19 outbreak, most customers browsed the food market but preferred the sit-down service and cooked meals. Now, with the statewide ban on dine-in service, many are buying much more locally grown fresh produce, she said.

“When all this began, we were lucky … because we have a market,” she said. “We noticed that the market just really took off. They wanted the locally produced goods like the eggs, and RedHouse meat, and Santa Carota beef.”

With the dine-in shutdown, the Blackwells decided not to make the full menu every day. And because Dot x Ott is a higher-end restaurant, they reduced their prices to make them more affordable for families.

“We came up with another menu of some of our best items that we could produce for families, and we decided to start doing free deliveries and curbside pickup,” she said.

“Our family meals started at $60, and we lowered them to $40; and for two people, we offered [meals] for $25. So many people just needed to eat, so we decided to lower the price, take the hit, and help out as much as we could.”

Dot x Ott’s lower-priced family meals and farm boxes, especially deliveries, are popular in Bakersfield, so much so that Blackwell has rehired one employee as a driver. The $25 farm boxes consist of about four to seven items that are in season or being harvested fresh from local farms.

“We’ve had a good response. It’s still quite a different feel and change to how things used to be,” Blackwell said. “But, you know, we’re feeding the community. We’re happy to still be here, and we are thankful the community still supports us. We’ve made our prices more community-friendly, knowing that so many people are in a very tough position right now.

Blackwell said she is careful not to overstock food, but when it does happen, the surplus is donated to the local food bank, Waste Hunger Not Food.

“We’re not overbuying [from the farms], knowing that everything is so uncertain and up in the air. We’re not buying in bulk right now,” she said.

“We’re buying as we need to, because we don’t want to waste money on food or waste food. Plus, there’s not a lot out there. We had a really hard time finding some of our essential ingredients, like eggs for a while, and meat. We just had to really be resourceful and quick. If we do need something, we plan ahead.”

Blackwell has learned to roll with the punches, adapting to the changing conditions of the market “every single day, multiple times a day,” she said.

The Blackwells, who just marked the first-year anniversary of their business April 9, haven’t decided whether or not to apply for federal relief.

“We’ll look into it, but our focus really has been just doing what we can in the moment, and things keep changing so I don’t know what we qualify for, if we can qualify, if it’s really going to help in the long term, or if it’s going to hurt us,” she said. “I don’t want to take on any more debt with a loan, but if that’s what we have to do, then that might be what we have to do.”

Jeff Salters, whose family owns two Salty’s BBQ restaurants in Bakersfield, considers himself one of the lucky ones. They are old-fashioned, drive-up restaurants with walk-up windows for take-out service. All of the seating is outdoors, so his business wasn’t hit as hard as those with all indoor seating.

A couple of weeks ago, Salters was driving to work thinking about the community that supports him and all 35 of his employees who are still working, and he wanted to give back.

“Then, it just popped in my head: Make A Difference Mondays,” he said.

So, every Monday, Salty’s BBQ randomly selects the names of struggling families who are nominated through private messaging on social media for a free family meal, and Salty’s delivers to them a sampler platter and sides valued at $100.

Not long after the first delivery, he received a message: “My Son was driving home from work to his wife & three kids and has a baby boy due in June, when he got your call, and he couldn’t believe it was true. He called me very excited to tell me. He’s 29 years old, so he doesn’t call me very excited very often lately. He got home and took a picture of the food and told me that you made him believe again that God is looking out for us all. Thank you so much.”

Darrell Feil, vice president of Abate-A-Weed, said while some aspects of his business are waning, others are growing—mainly weed control.

The company, also based in Bakersfield, employs about 30 people, with about 20 who work in weed control. The company, which was founded in 1965, also sells lawn and gardening tools and equipment, as well as weed killers, insecticides, and fertilizer.

Feil expects to add eight to 10 employees, but not all at once. Although fluctuations in international oil markets have tanked weed-control operations near oil rigs, business has picked up overall because of a higher demand for weed control near electrical poles for wildfire prevention.

Feil, who chairs the National Federation of Independent Business (NFIB) Leadership Council in California, said he is proud of the way local businesses such as Makenzie Hollar Photography, Dot x Ott, and Salty’s BBQ have lifted the community’s spirits during the crisis.

“I feel pretty good about what the federal government has done with the CARES Act,” Feil said. “And I think the governor is doing a good job of getting the word out.”

Recently, Feil participated in a conference call with California Labor Secretary Julie Su and other state officials about what the state can offer small businesses that are hurting.

“That was a pretty positive meeting,” he said.