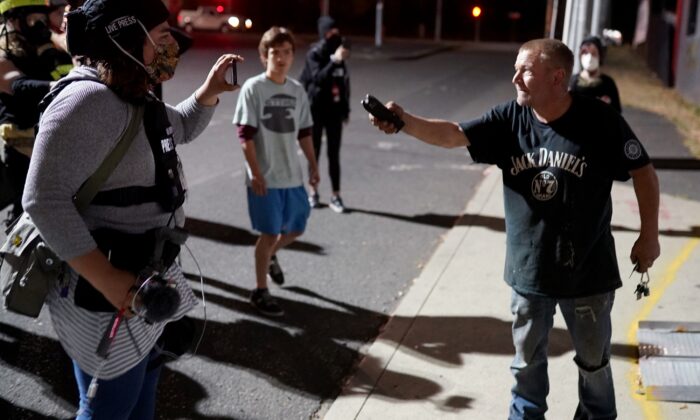 A man brandishes a stun gun during an argument with demonstrators after they went to his business in the South Waterfront neighborhood in Portland, Ore., on Aug. 20, 2020. (Nathan Howard/Getty Images)
Social Issues

Businesses are shifting operations from downtown Portland, Oregon, or scuttling plans to open stores there because of the near-nightly rioting and protests that have gone on since May 28.

Portions of the city are boarded up. Rioters, who often gather around 9 p.m. and don’t disperse until early the next morning, had caused tens of millions of dollars of damage or lost business by early July.

While many Standard Insurance employees have been working from home since March because of restrictions related to the CCP (Chinese Communist Party) virus pandemic, some continued to work from its downtown headquarters until recently, a spokesman told The Epoch Times.

“Many of those employees who had remained in our downtown offices have now been temporarily moved to our Hillsboro campus to ensure their welfare in light of continuing safety concerns and property damage downtown,” the spokesman said in an email. “Several employees and security contractors have been assaulted near our downtown offices in recent weeks and months, and that contributed to the decision.”

Other business owners who planned to open stores in Portland despite the pandemic have put those plans on hold or terminated them due to the unrest.

“We were actually going to open two stores in Portland, and then all this happened,” Joe Raetzer, co-owner of Steepologie Teas, told The Epoch Times.

Asked whether “all this” meant the pandemic or the unrest, he said: “Just purely the unrest. The riots.”

Steepologie also shut down its downtown Seattle location because of rioting there; an employee was assaulted inside the store.

In an interview with The Epoch Times’ affiliate NTD Television, Uncle Fabe’s owner Fabian Gordon said he knows business owners who have started to sleep at their stores.

“They’re talking about going up on the roofs of their buildings with guns. They’re terrified. People are setting fires. When’s it going to happen to them?” he said. “They’re heavily armed and they’re all very afraid.”

Gordon said city and state officials seem to be handling the situation by hamstringing the police and pointed to the new prosecutorial policy of presumptively dismissing charges that include riot, disorderly conduct, and interfering with officers.

In a recent letter to City Council members published by local media outlets, a major developer said the riots are having an unprecedented effect on businesses.

“If you know a retail or office broker, give them a call and ask them how many clients they have are trying to leave. The number is like nothing I have seen in 42 years of doing business in downtown,” Greg Goodman of the Downtown Development Group wrote.

“Their departure has absolutely nothing to do with Black Life’s Matter [sic] movement (which has been a positive) but does have most everything to do with the lawlessness you are endorsing downtown. You are doing an excellent [job] of enabling people who don’t know or care about George Floyd to ransack our city at the expense of the people you are trying to help.

“Think how many jobs have been lost by people of color in our city, not through protest, but from vandalism. I would make the case that your actions have hurt those you have intended to help.”

Goodman said “a larger number of businesses are moving out of or locating outside of the Central City,” including Daimler Trucks North America, Airbnb, Banana Republic, Microsoft, and Saucebox. Google is halting construction in the Macy’s building, he added.

A Google spokesman told The Epoch Times via email that the unrest hasn’t affected the company’s construction schedule, while a Daimler spokesman said the company has no intention of moving its headquarters. An Airbnb spokesperson said employees have been working from home since March.

A Microsoft spokeswoman said in an email that some employees looked into the matter “and we have nothing to share.”

Gap, which owns Banana Republic, and Saucebox didn’t immediately respond to a request by The Epoch Times for comment.

“There’s been so much frustration, and so many small retailers and businesses that have closed, and big businesses are leaving downtown because they don’t think our elected officials don’t care,” Goodman told KPTV.

Wheeler touched on the issues facing businesses, in a virtual briefing on Aug. 26.

“Violent extremists,” he said, have seized an opening “to do harm to our city, to scare our core downtown employers at night, to wreak havoc in an effort to drain city resources,” he said. “We must clean up the damage and the defacement of our downtown buildings, especially near the Justice Center.”

Wheeler planned to meet with key stakeholders in the community to adopt certain measures to try to fix the issues. He says he’ll unveil publicly his solutions for how to support business recovery in the coming days, but the broad strategies include helping businesses that have suffered losses not covered by insurance and assisting in the cleanup of graffiti.

“We want to get about the business of cleaning up our community, of investing in our community, of restoring the confidence of employers in our community to be able to let people come back to the downtown area, in particular, and reopen,” he said, adding later that the city has to “work with our local employers to help them get back up on their feet and help their employees and their customers feel safe coming downtown.”