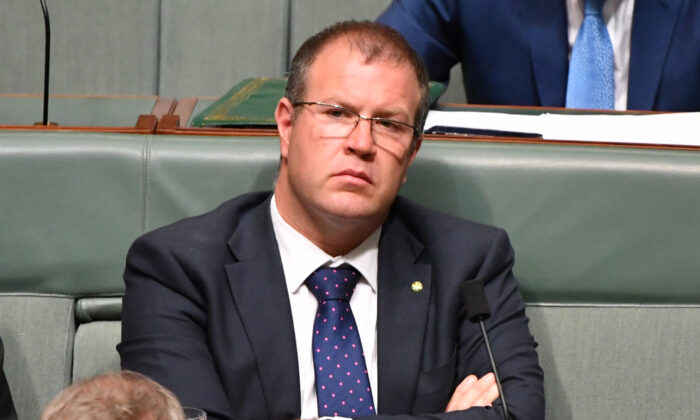 Ben Morton, Liberal Member for Tangney, during Question Time in the House of Representatives at Parliament House in Canberra, Australia, on Feb. 13, 2019. (AAP Image/Mick Tsikas)
Australia

The Business Council of Australia has praised the federal government’s “common sense” JobMaker plan for economic recovery by cutting red tape that makes it harder to own and operate small and medium-sized businesses.

Ben Morton, the assistant minister to the Prime Minister and Cabinet, told a Business Council forum in Sydney on Oct. 2 that the government’s deregulation plan was about the “ease of doing business” and would focus on removing “unnecessary, disproportionate, and inefficiently implemented regulation.”

“Good regulation is critical to making Australia one of the best countries in the world to live, and ensuring Australia has a well-functioning economy, society, environment, and democracy,” Morton said.

“Bad regulation is a ‘Job-Killer’ with no redeeming features,” said Morton. “It inhibits consumer choice, business innovation and investment, and jobs growth.”

Explaining that it was his view that the government should regulate as minimally as possible Moreton argued that he envisions a business environment where “the Commonwealth public service leadership drive their own deregulation buses within their portfolios.”

This, he argued will allow for the removal of unnecessary regulation, it will streamline regulatory processes across jurisdictions, eliminating duplication; and drive forward the harmonisation of regulation between the government and other jurisdictions, domestically and overseas.

Tim Reed, president of the Business Council of Australia, thanked Morton for “listening to the concerns of business” and praised the Morrison government for its “common sense and practical approach to removing job-destroying regulation and unnecessary red tape.”

“The speed and strength of our recovery hinges on the ability of businesses to get back on their feet, invest and hire new workers but one of the main obstacles they face is poorly designed and inefficient regulation,” Reed said in a media release on Oct. 2.

Reed said unnecessary regulation was one of the first things to be jettisoned during the pandemic in areas such as delivery curfews for supermarkets, approval times for projects, and retail trading hours.

“The long-term removal of these handbrakes on the economy will benefit all Australians. Red tape is not only a burden on business, ultimately it is a cost to consumers,” he said.

Morton also announced a new regulator performance role within the prime minister’s department that will work with ministers and agencies to help ensure a consistent and coordinated approach to regulators.

The department would also lead a pilot project, with the Australian Public Service Commission and Agriculture department, to lift the performance of the agricultural export regulator.

As well, funding will be provided in the federal budget to be delivered on Oct. 6 for extra work by the deregulation task force set up within the prime minister’s department.

“Importantly, deregulation agendas must not rise and fall—they must remain embedded in government,” Morton said.

“It is like painting the harbour bridge—the work will never be completed, but it must never be paused.”