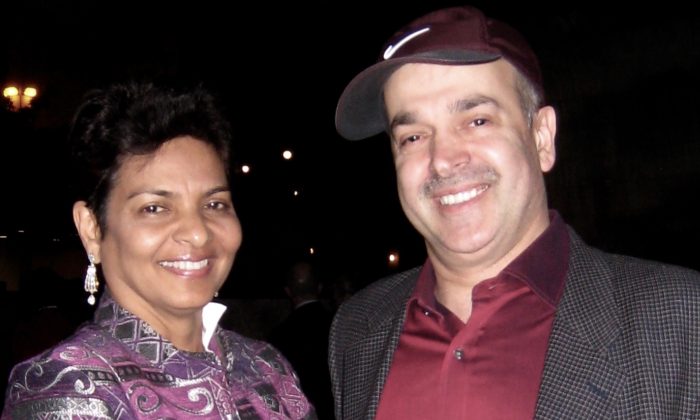 After the performance, while walking out of the theater, she explained her experience.

“I thought that was amazing—beyond my imagination,” she said. “The dance was great.”

“Still now, I can’t get over the vibrancy of the costumes,” she continued. “Every color was blended beautifully. It was wonderful overall.”

Shen Yun is a New York-based, world class, classical Chinese dance and music company that tours the world for nearly six months of the year on its mission to revive traditional Chinese culture.

Every costume in a Shen Yun performance is a brilliant spectacle of colors.

The company website explains the importance of ancient Chinese attire. “The right clothes gave off an aura of refinement and dignity. It embodied the virtues of Chinese antiquity, and contributed to the culture’s perception of self.”

Since ancient times, the area now called China was known as the “Celestial Empire.” It describes “a land where the divine and mortal once coexisted,” according to Shen Yun’s website. “It refers to the belief that the divine, through various dynasties, transmitted a rich and abundant culture to the Chinese people.” Chinese culture, therefore, is thought to be divinely inspired.

This precious heritage has been endangered, however, and devastated for the past 65 years of communist rule. During the Cultural Revolution, in particular, sacred temples and cultural sites were destroyed, and even Chinese people’s belief in virtues and the divine was attacked.

Mrs. Moos said she loves that Shen Yun is using the performance to bring about a change. “I just loved it because it was awesome. What a wonderful way to bring a message to the world,” she said.

For Mrs. Moos, the message was hope. “The message was to make the world understand,” she said, “that we cannot be suppressed. … I thought it was done in a beautiful way.”

Another business owner, Ken Blackman, who runs Paragon Resources, watched Shen Yun March 26 with his wife, Sue. Both were enamored with the performance.

She noticed the genuine joy of the dancers.

“When they’re together, even though there’s a large group of them on the stage, they look like they’re enjoying being together. They look like they’re working together as a team. You don’t get the impression that there’s just one person [as the star], even though there’s some solo things being done,” she said. “I had the impression that they’re enjoying what they’re doing and enjoying presenting … ‘It’s not acting, it’s living,’ as another audience member said.”

They really put their heart and soul into it. It’s making me tear up.
— Sue Blackman

She continued, “I just really commend all the dancers, choreographers, [and] everybody that has anything to do with the show. They really put their heart and soul into it. It’s making me tear up,” Mrs. Blackman said.

“It just flows; it’s just beautiful, just beautiful,” she said. “But just watching everyone dance and [to be] so in tune with each other—it just was stunning. I don’t know how else to describe it.”

“I feel very fortunate to be able to have seen this,” he said. “It was really an amazing experience.” He said he can’t wait until Shen Yun comes to San Diego next year.

During the performance, Mr. Blackman learned that Shen Yun is not allowed to perform in China due to the Chinese Communist Party’s censorship and repression of artistic expression.

“It’s truly a shame that people in China can’t see this,” he said. He hopes that the situation changes soon.