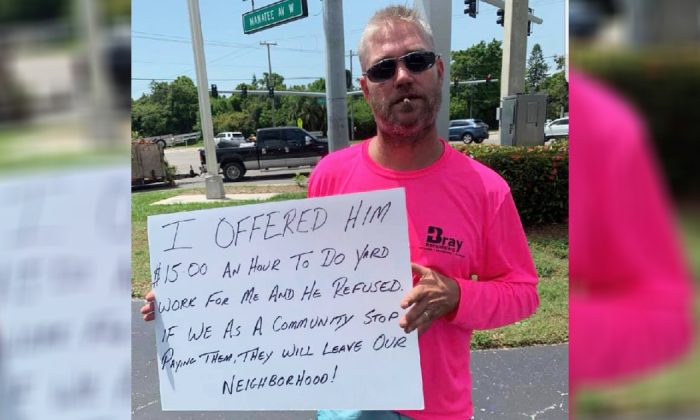 Business owner Ryan Bray warns drivers not to donate to a homeless man who refused a job offer in Brandenton, Fla., on July 14, 2019. (Courtesy of Betsy Ryan/Facebook)
US News

A Florida business owner took to the streets on July 14 to warn the public not to donate to a homeless man who recently turned down a job offer.

However, the homeless man allegedly refused and kicked Bray’s tire and rudely told him to leave. Unhappy about the rejection Bray decided to warn others not to donate to the panhandler to discourage him from asking for handouts and hopefully find paid employment instead.

Bray prepared a handwritten sign stating, “I offered him $15 an hour to do yard work for me and he refused. If we as a community stop paying them they will leave our neighborhood,” and held the sign in front of drivers near the panhandler.

“Ryan has been working the same corner for the last couple of hours with his sign trying to get people to stop giving him money and chase him away,” wife Betsy Bray said on Facebook. “They [panhandlers] are liars and only want handouts they do not really want to work like the rest of us have to do for a living.”

Since July 14, the post has been liked and shared nearly 400 times, attracting nearly 250 comments.

“The reality is if we stopped giving money they would move,” Ryan commented on Facebook. “As the five different Bradenton Police Department (BPD) officers that were present for the majority of my three hours stated, Northwest Bradenton is a gold mine for them.”

Ryan claims although it is unlawful to panhandle throughout Manatee County, BPD has no power to enforce the regulation.

“The ordinance that BPD adopted was Manatee County’s ordinance, which has since been rescinded thereby giving the law enforcement no real authority to enforce the law,” he commented on Facebook. “That said, we as citizens have the right to protest their panhandling next to them.”

Betsy supported her husband by proposing all of their friends and concerned citizens band together to take turns holding signs, asking locals to stop paying the panhandlers so they will leave the neighborhood.

“As long as we are there like 5 feet away they won’t make anything,” she said. “I don’t understand how people are willing to stand in the heat for hours and hours and hours to beg for money when they could be doing a job there are plenty of jobs out there”

Ryan Bray of Manatee County offered a homeless man a hand up when he asked for money. He offered the man a job. Ryan says he turned it down so he made this sign in response. Now when the man panhandles he holds this sign for all to see @FOX13News #Manatee #Bradenton pic.twitter.com/d1gQd4AIVq

Betsy said she witnessed a young girl and boy who were panhandling in the local area refuse help to find accommodation.

“I also heard that someone offered to give them money for a shelter and they refused,” she said. “I think somebody called to check on their story and it did not check out the way they said.”

She also accused a family that regularly busks in front of the Publix supermarket of refusing help to find paid work.

Lady Welcomes Homeless Man Into Her Home. Days Later, He Barges Into Her Room & Saves Her Life

“I heard that Danny’s Pizza offered him a job playing music outside of the pizza place, and he turned it down because he makes more money panhandling,” Betsy said. “That is what sparked the whole thing, my husband offered him $15 an hour to come do some yard work and he said no way that’s not happening, and then kicked my husbands tire when he wouldn’t give them any money, and that just put my husband over the edge so he went home made his sign and came back.”

Ryan’s attempts to deter panhandlers has attracted significant media attention. However, Betsy believes the general public is still not getting the message.

“While he was doing the news interview the same guy came back to the corner and started cussing out all the news people calling them every name in the book and then somebody even had the nerve to give him $10 can you believe it?” she said. “That was the skinnier older bearded guy who does a lot of cursing.”

As we were shooting our story the homeless man showed up. He wouldn’t give us his name, but he claims he’s not doing anything wrong @FOX13News #Manatee #Bradenton pic.twitter.com/MnAkTUXtBf

Fox13 reported the panhandler has asked not to be identified by his name and maintains he did nothing wrong by asking drivers for help at the intersection.

Turning Points executive director Adell Erozer confirmed some panhandlers can make a living out of the generosity of the community.

“It’s hard to tell the difference between someone who is really homeless and somebody who is out there just panhandling,” Erozer told Fox13.

Experts say the safest way to donate is to give to registered organizations that help the homeless.

“The best thing to do, if we all really want to get rid of panhandlers, is to not give to panhandlers,” Erozer said.

The City of Bradenton has confirmed with Fox13 it will discuss the topic of panhandling on July 24.