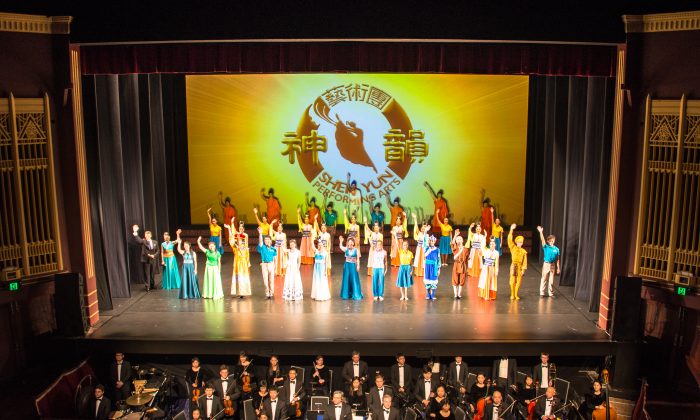 PERTH, Australia—What would inspire a Perth businessman to treat 13 staff members to Shen Yun Performing Arts at the Regal Theatre on Jan. 31?

The Australian born man of Italian heritage, when on a chance visit to Canberra two years ago, saw a Shen Yun pamphlet.

“The colour, the colour on the pamphlets grabbed my attention, the costumes grabbed my attention, the different colours in the costumes,” said the world traveller who’s visited 43 countries. He looked through a booklet and saw photos of acrobatic dancers in mid-air with smiling faces. These grabbed his imagination. How could these dancers make a perfect movement and still smile and express so much?

“The facial expressions and yet they can make their body make a perfect movement. It’s artistic!” he said. “I sensed it was a little bit like my art.”

The art of a hair stylist creates something new. “Being an artist we create style, we create hair, we create a look and we make people smile,” said Anthony Aquilia, a hair stylist and hair salon owner said. His family has been in the hair-styling business for 42 years.

He had a longing to see Shen Yun but unfortunately he was unable to attend at the time. So when he saw a pamphlet near his own hair salon, and Shen Yun was coming to Perth, he thought all his Christmases had come at once. He wanted to share his joy and experience of this classical Chinese cultural experience with all his staff, so this was to be their Christmas present this year.

He appreciates how hard his staff work all year, but especially over Christmas and the New Year so he wanted to give them something special.

“I thought what a great opportunity for me and my staff to absorb some culture, some knowledge,” he said. He told his staff, “It’s a little bit different but it’s artistic and it grabs the people’s imagination.”

Did it live up to his expectations?

Shen Yun is based in New York and has classical Chinese dance at its heart but also incorporates folk, ethnic dance as well as story dances spanning China’s millennia of history and culture.

The Shen Yun website states, “Sophisticated dance techniques, an orchestra joining instruments from both the East and West, beautiful costumes, and a stunning back drop—this is Shen Yun at first glance. But digging deeper, one discovers a sea of traditional Chinese culture.”

Mr. Aquilia said he had visited China but hadn’t captured the essence of the culture, yet in one afternoon by watching Shen Yun he had an insight into those thousands of years. Shen Yun did what present day China cannot do.

I thought it was extremely elegant.
— Anthony Aquilia

He was so moved by the experience, he felt he had no words to express what he had experienced. “I thought it was extremely elegant. Colourful. The picture perfect! Their movements just flowed. I really don’t know how to explain it. Wonderful to watch!”