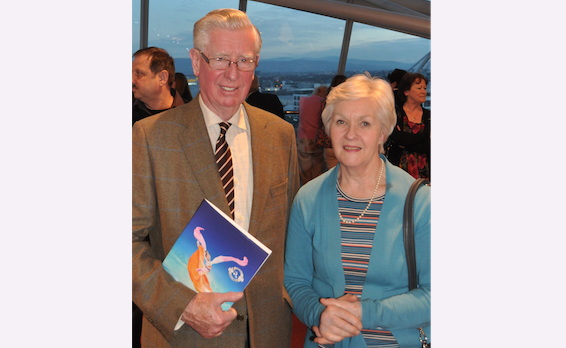 DUBLIN, Ireland—Business owner Mr. Leonard Little enjoyed Shen Yun with his wife Yvonne, on April 19th, in The Convention Centre Dublin. He said he was impressed by the skill the Shen Yun dancers showed in choreographing their movements with the live digital backdrop on stage.

“The sets are very good. The method of portraying them flying away to the heavens on the backdrop is very clever. The timing between the backdrop and the dancers—there is no doubt about it—there is huge skill there,” said Mr. Little.

With landscapes and images specially tailored to the legends and stories depicting China’s 5,000-year culture, Shen Yun employs a huge digital backdrop choreographed to each dance routine in the show. According to the Shen Yun website, “With state-of-the-art graphics technology, Shen Yun’s digital-backdrop team creates vividly animated settings, extending the stage and transporting the audience to a world where heaven and earth are one.”

Mr Little was also highly impressed by the dancers. “The dancers are extremely elegant and fit, and have beautiful costumes. It is a very pleasant evening,” he said.