Business Owner: Shen Yun Brings ‘A Peace That Could Pass All Understanding Through’ 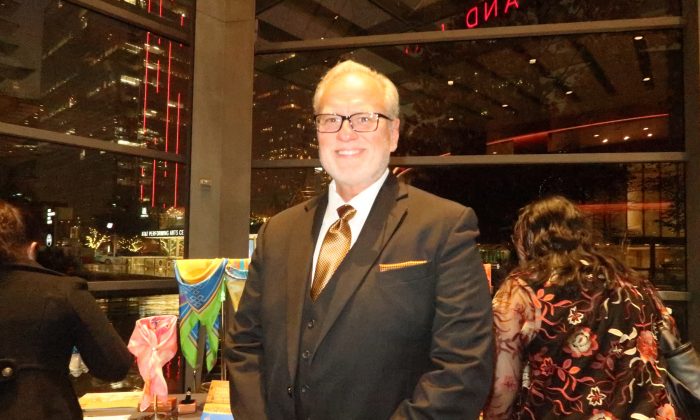 DALLAS—Michael Keegan, a business owner in realty development and brokerage, was given a ticket by a friend to see Shen Yun Performing Arts in Dallas, Texas.

“It is very nice treat,” Keegan said on Jan. 11 at the Winspear Opera House. “I have wanted to see it for sometime.”

Shen Yun was formed in 2006 in New York with the mission of reviving the true culture of China, almost lost in China itself, and sharing it with the world. Each year they tour with a new production and all new stories drawn from China’s vast and rich history.

Through classical Chinese dance, a live symphony orchestra with Chinese and Western instruments, and solo musical performances, Shen Yun brings a civilization to the stage that has was once almost lost.

“I like the stories,” said Keegan. “I like the culture, how they took us through a time period over many hundreds of years. And I also think it was very relevant today how such great culture is oppressed to some degree, where they can not even enjoy their own culture.”

Chinese people in China cannot see Shen Yun. In its 13 years of touring, Shen Yun has never traveled there. It would be too dangerous given that China is currently ruled by the Chinese Communist Party, which has persecuted and smothered the traditional 5,000-year culture, its spirituality and values, in the land where they originated. The art company members, including many young performers, could face imprisonment, torture, and even death if they were to go China, because of their dedication to their traditional culture. Each year, Shen Yun includes a story or two set in modern China to help audience members understand the situation.

“I mean, you know, you hear, but to be told in story form, it really touched my heart,” said Keegan, “because it is such a wonderful culture.”

“I liked the aspect that there is a tribute to the art, but also to the deity, and also to the culture. It is telling the complete story of people, through dance, and through music, and comedy.”

For the long expanse of Chinese history, the spiritual values of the culture found shape through each dynasty, and Shen Yun shows this via music and dance. Keegan resonated with the spirituality he saw.

“I am a strong believer in my faith, and I also noticed that when they’ve talked about the deity, ‘He’ was capitalized, which I see in my faith also, where we capitalize God’s name. And so, it is a form of a worship as well, the dance, I saw that.”

Keegan searched for the perfect word, and said that Shen Yun was inspiring.

“It brought what I refer to as a peace that could pass all understanding through, no matter which you are going through,” he said.