Democrats Strive for Unity in Denver
0 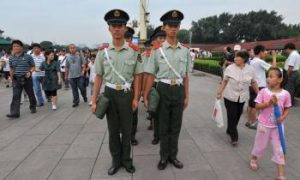 How Much Longer Will We Be Deceived?
0
Arts & Culture

SAN JOSE—The second showing of Shen Yun Performing Arts did not disappoint audience members at the San Jose Center for Performing Arts at the matinee on Saturday, April 9.

Among those in the audience were Sidney Flores and Evelene Ballard, the owners of Cambrian Bowl in San Jose. Ms. Ballard said the show is "just spectacular" and she "couldn't believe anything could more beautiful."

Overall, "the dancing all in unison, in step together" impressed Mr. Flores, he said.

"It was just a fantastic production. We're glad we came," he said.

For Ms. Ballard, the piece Plum Blossom caught her eye. The dance portrays the spirit of
"resilience amidst adversity," according the Shen Yun program book, with female dancers portraying the flowers blooming in spring, which are seen as an auspicious sign that winter is ending.

"That was so beautiful. It's amazing how they reorganize themselves. Unbelievable. I couldn't believe me eyes," she said.

The opera singers stuck a chord with Mr. Flores. The several singers throughout the show are world-renowned and sing in the Bel Canto style.

"They were really good. [Singer Haolan Geng] … was really wonderful," he said. "Just a wonderful voice that she has. Really great."

Shen Yun seeks to revive the 5,000-year-old Chinese culture that was that has been systematically destroyed under decades of communist rule. The show presents the traditional culture of China through classical Chinese dance, an orchestra that joins together Western and Chinese instrumentation, and singing.

"You can hardly describe it in one word," said Ms. Ballard. She said her and her husband will be back again next year.