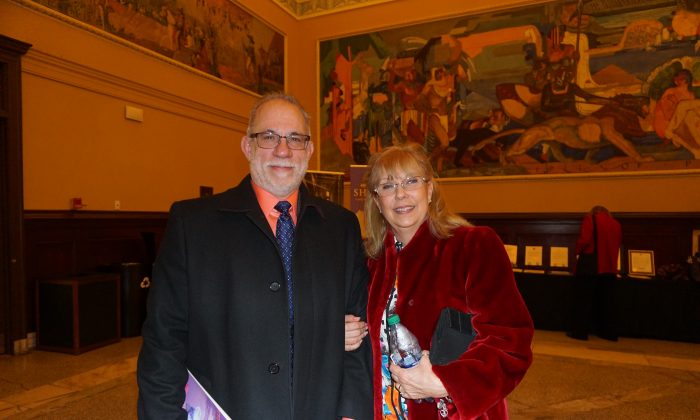 CLEVELAND—Christi Bechtold has seen Shen Yun multiple times, and what makes her keep coming back is because she says, “It makes my eyes happy. It’s just so beautiful.”

Through classical Chinese dance, orchestral music, elegant pageantry, and digital interactive scenery, Shen Yun continues to fulfill it’s mission to revitalize traditional Chinese culture, as it has since its inception in 2006.

“I learned so much, there’s so much emotion in the dance, that’s what I love the most. The dance is beautiful, it tells the history and the culture of a beautiful culture that shouldn’t be lost and is so wonderful to learn about it,” Mrs. Bechtold said.

One of the things that stood out to Mrs. Bechtold throughout the performance was the dancers’ devotion.

“There’s a lot of devotion. That’s the one thing I see, is there’s devotion to Buddha. I see that love there—their intense love.” she said.

For Mrs. Bechtold, the salvation of humanity and that need to grasp onto something that is greater than oneself seemed to be at the center of everything—all of the dances in the performance.

Mrs. Bechtold commented on one of the more contemporary pieces, which depicts modern peoples’ cell phone addiction. And although technology has allowed us to connect with people around the world, sometimes we’ve allowed ourselves to become closed off from those immediately around us.

Mrs. Bechtold said, “In the dance I think I saw … what I see happening in our culture today, which is causing people to turn away from each other and become inward, [which is] becoming part of a bigger issue.”

The way the performers were able to convey entire narratives through dance, and emotions through movement so that the audience could empathize, was something the Bechtolds were moved by.

Mr. Bechtold talked about the expressiveness and emotion of the dancers and described their motion as fluid and sensitive.

“It’s captivating, it brings you back in. The color, the emotions, the costuming is just incredible… It’s mesmerizing,” he said.

Mrs. Bechtold said the beauty they saw on stage was also a reminder.

“I come here and to see this and I love it, because there’s so much about the Chinese culture that is so beautiful. And yet, there is so much that the Chinese people are suffering today and that shouldn’t be,” Mrs. Bechtold said.

For Mrs. Bechtold, the performance she saw showed a wonderful culture from a country with  thousands of years of history.

“There is so much beauty there and so much intelligence that came out, there’s so much wonder that came out of that country, and we can’t let that be oppressed,” she said.