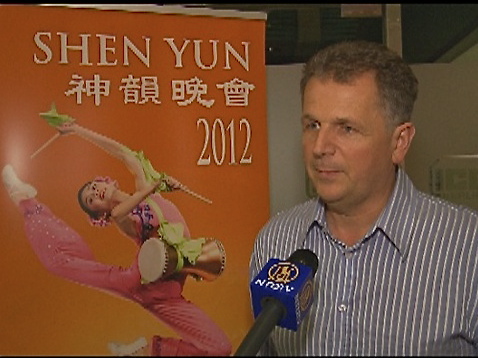 Business Owner on Shen Yun: ‘I have never seen anything like this show’

He was glad his Chinese friend, Song Wu, had convinced him to go.

“I have never seen anything like this show. Yes, I did hear a lot about the show, but to experience the show first-hand is like a fairy tale movie. I’m happy that I took the opportunity to see the show.”

There was so much to see and so much to take in, all he could say was one word, “Unbelievable,” as he tried to absorb so many things.

Then he found more words: “Everything the artists brought on stage was very interesting. I experienced harmony, great color combinations, and I felt as if I had slipped into a fairy tale.”

One important thing he took up was “Tolerance.” He had not been interested in China before, but the performance made him aware of the human rights problems there.

“Some of the scenes aroused my curiosity. I knew nothing of it before, but now, since I have been made aware of what is going on in China, I will definitely look into it.”

‘The hours passed as if they were just minutes’

Both ladies sat in the fourth row, just a few seats away from the orchestra pit and the stage, because they wanted to see the facial expressions of the performers and see everything close-up.

“It was a great present and was worthwhile,” said the daughter, Ms. Guenoc.

Her mother couldn’t agree more and said, “The show was very touching and was beautiful in an esthetic sense.”

Ms. Guenoc was of the same mind, “The movements were outstanding and the entire show was fantastic. There were many touching moments, especially when listening to the story about Falun Dafa.”

Ms. Guenoc had heard about Falun Dafa about a year ago from flyers she was handed at a booth. Falun Dafa is a Chinese spiritual practice in which adherents live by the principles of Truthfulness, Compassion and Tolerance. The practice is banned in China and its practitioners are persecuted.

She said, “Shen Yun helps expose the plight of Falun Gong practitioners and it is not only the practitioners that suffer, but also the Chinese people at large. Now, I understand how large the problem is, especially as such an international group as the Shen Yun brings the happenings in China out into the open.”

“We have seen traditional Chinese dance, … This is something exceptional,” said Ms. Daniele.

Both, mother and daughter agreed to have seen a unique show and Ms. Daniele said, “I must admit that I’m deeply impressed and that I will not miss this show in 2013.

Ms. Guennoc added a few thoughts of her own before leaving, “I can only say that this was a very emotional show and the hours passed as if they were just minutes. The presentation was well done and at a high level.”