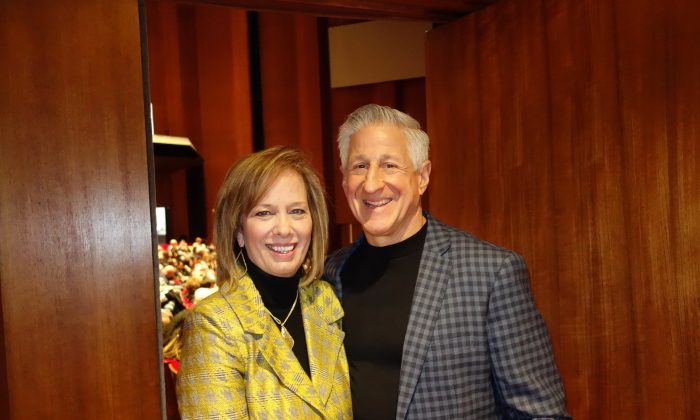 “It’s sad that China’s that way. Very heartbreaking,” she said.

Sandra, owner of realtor business, The Marconi Team, attended the performance with her husband, Dominic, at Jones Hall for the Performing Arts in Houston, Texas, on Dec. 30.

The New York-based company is in the midst of its 2019 world tour, which involves six equal-sized groups travelling to over 100 cities across dozens of countries.

Shen Yun Performing Arts’s goal is to present 5,000 years of Chinese civilization on stage through music and dance. It depicts stories from China’s vast history through classical Chinese dance, in conjunction with music from a live orchestra featuring both Chinese and Western instruments, and an animated 3-D backdrop to transport the audience to a faraway time and place.

The stories told and recorded throughout Chinese history portray the essence of its culture. They speak of a culture deeply connected with the divine or heaven, and a people who emphasized living their life in accordance with virtues such as benevolence and justice, propriety and wisdom, and respect for the heavens.

This rich culture was all but decimated when the Chinese Communist Party seized power in 1949. The party launched numerous political campaigns to purge tradition and religious belief, culminating in the Cultural Revolution of the 1960s and 1970s, which sought to systematically destroy the values and ideas from China’s ancient culture and replace it with an atheistic doctrine prescribed by the party.

Shen Yun also portrays stories from modern day China about the persecution of practitioners of the spiritual discipline Falun Gong, also known as Falun Dafa. Falun Gong consists of meditation exercises and ancient teachings revolving around the principles, Truthfulness, Compassion, and Tolerance. Such teachings represent a continuation of traditional Chinese culture that has long been repressed by communism.

Sandra said the story that stood out the most was the depiction of a young woman who was thrown in prison in modern day China because she practiced Falun Gong. She noted that a lot of Westerners may not even know that this is currently occurring in China.

She said felt a lot of emotion while watching that story.

“I think that scene with the madam and daughter is so heartbreaking, because you know that still goes on,” Sandra said referring to a particular scene within the story.

Dominic, a designer, said the story had a powerful message.

“[The story] was actually a slam against Communism, because Communism believes that their government’s the highest power. There’s no divinity above that. And I think that’s what they are portraying here, is that there’s a power above the government.”

He encouraged Shen Yun to keep portraying their message, which he described as follows:

“Even if our beliefs are different, we see that you’re trying to portray that there is a higher power than the government, which is important,” Dominic said.

With reporting by Sarah Yu and Cathy He.