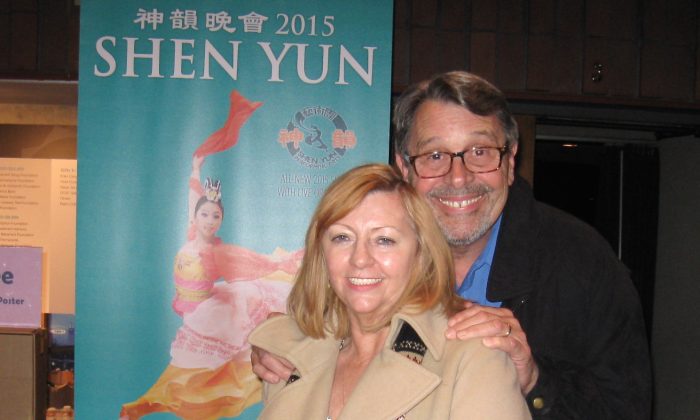 BERKELEY, Calif.—”It was extraordinary in every way. I just loved every bit of it,” said Linda Notzon. “I’ve been wanting to come for a long time, and my husband got us tickets, and we were so excited to come.”

Such is the magic that Shen Yun brought to Berkeley this year. In attendance on Jan. 7 were Linda and Rich Notzon, owners of a security business in the Bay Area.

“I loved all the costumes, they were really beautiful,” Rich Notzon said.

For many who see Shen Yun, the attire worn by the dancers is one of the first things they notice, and for good reason.

Not only are all the costumes handmade, but they are fitted for each individual dancer, to project a seamless depiction of China’s traditional culture.

“All the scenes were really beautiful. I loved all the colors, I loved the background and how they animated it, and how it all came together, it was absolutely stunning,” Mrs. Notzon said. “

It was divine!
— Linda Notzon
“

With its state-of-the-art animated, projected backdrops, Shen Yun can transport viewers to different places (and periods) in Chinese history.

According to the Shen Yun website, “These digital backdrop designs complement and synchronize all aspects of the performance: the characters, color of the costumes, specific dance movements, props, lighting, the story being told, particular notes played by the orchestra, and special audio effects.”

After such a long wait to see Shen Yun, Mrs. Notzon is ready to spread the word to her friends and bring the rest of her family to the performance.

“It was a very good, family-oriented, cultural base. Beautiful production,” she said. “I already posted a picture of us, right in front of the poster, on my Facebook. They’ll be asking questions, and I’ll be answering!”