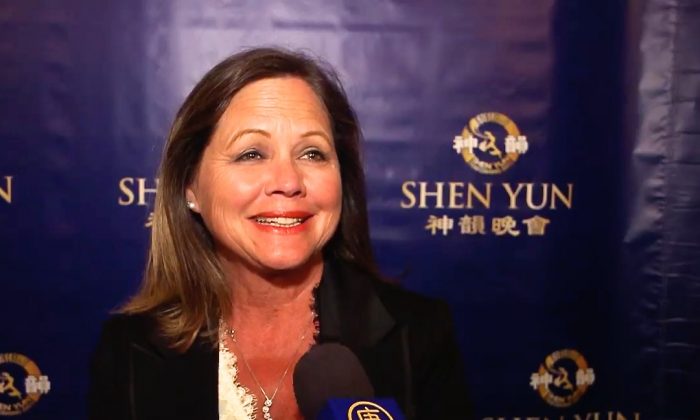 The Makela family descends from one of the original founders of Santa Barbara.

Mr. Makela is the owner of several successful businesses, including Santa Barbara Olive Co., the top specialty olive company in the United States.

He had high praise for the night’s performance.

“Very precise. Concise. In other words, very perfect,” said Mr. Makela. “Perfect dancing. Because everything, the choreography, the precision was perfect.”

Established in 2006, New York-based Shen Yun is a non-profit organization dedicated to bringing 5,000 years of Chinese culture to life through the performing arts. Having reached millions of people in nearly 20 countries and over 100 cities, Shen Yun is now widely regarded as an international phenomenon.

Mrs. Makela seemed to enjoy the show as much as her husband.

“The event is beautiful,” said Mrs. Makela. “It’s an example of what the spectacular Chinese history has to offer us.”

As the website explains, “Sophisticated dance techniques, an orchestra joining instruments from both the East and West, beautiful costumes, and a stunning back drop—this is Shen Yun at first glance. But digging deeper, one discovers a sea of traditional Chinese culture. Mortals and divine beings merge on stage as one. Principles such as benevolence and justice, propriety and wisdom, respect for the heavens, and divine retribution, all come to life, washing over the audience. Originating from Confucianism, Buddhism, and Taoism, these ideals are the essence of traditional Chinese culture.”

Mr. Makela described the night as “colorful” and “glamorous.”

“Come see the show,” he advised to potential audience members.

Reporting by NTDTV and Morgan Bradley