Business Owner Astounded by Shen Yun’s Depth and Beauty: ‘I could feel my heart healing’ 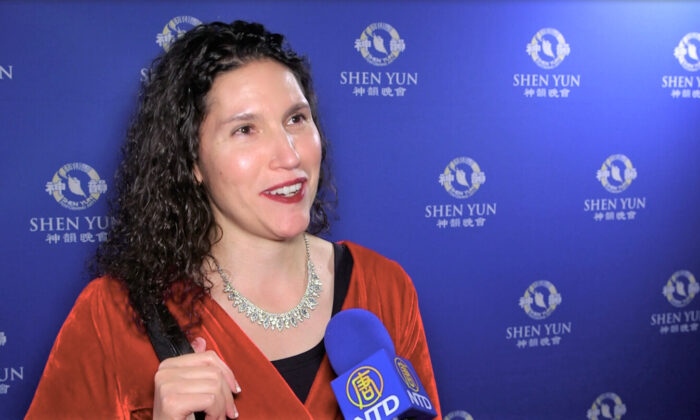 TUCSON, Ariz.—The most astonishing thing that audience members report about Shen Yun Performing Arts may be something other than its gravity-defying dance technique, its full, live-orchestra, or its mesmerizing colors. Some theatergoers actually feel healed in some way or another after they watch the performance.

Many attribute this to the positive energy the performers exude; others, to the higher power depicted in the performance’s storytelling dances. Tonight, at the Tucson Music Hall in Arizona, Michelle Virginia Burger felt her heart heal as she took in the classical Chinese dance performance that had brought its full-scale production there from New York.

Burger is a mother, a realtor, a home designer and a builder who owns three companies in Southern Arizona. It was her first time seeing Shen Yun, but she was certain it wouldn’t be her last after how moving and enriching she found it to be.

“[Shen Yun] is astonishing. It’s better than I could have imagined and I imagined quite a bit actually. So it’s beautiful, it’s touching, and I feel like I’m being rude because I can’t clap half of the time. I’m on the verge of tears, or I’m laughing, or just so touched, just really extraordinary,” Burger said.

Shen Yun is on a mission to revive traditional Chinese culture through the performing arts. Some of its roughly 20 vignettes feature core themes that made China’s 5,000-year-old civilization what it was: spiritual beliefs, moral principles, heavenly beings, and colorful legends. They also depict scenes from modern-day China where a full-scale persecution is taking place by the communist regime against those who still revere the spiritual aspects that made China what it once was.

“Oh my goodness, the whole theme about religious persecution just was touching and so powerful,” Burger said, “and particularly the dance about the two brothers, was amazing. I had tears pouring down my face the entire time, and while you were discussing it, as I was reading the program, it was just an incredibly powerful story, and I intend to, as much as I possibly can, help get the word out on that. It is very important I think.”

“Abetting the Wicked” is a dance story about two brothers who find themselves on opposite sides of the persecution, with one brother working for the Chinese Communist Party, the entity responsible for the campaign against innocents, while the other brother attempts to protect innocent lives.

Falun Dafa practitioners are especially targeted by the ongoing persecution in China and appear as characters in Shen Yun’s performance. In fact, Shen Yun artists themselves practice this ancient spiritual discipline and attribute their own stage energy and skills to its profound impact.

Burger admired this aspect of Shen Yun and wanted to know more about Falun Dafa herself.

“I think it’s wonderful. I’d like to get the book and read it myself. I studied different religions cause I like to respect anybody I possibly can. I’ve read the Tao Te Qing, I’ve read works of Buddha, I’ve read the book of Mormon, I’ve read the Bible, I’ve read several things. And I would love to get that [Falun Dafa book] in my library as well,” she said.

You know, I actually came here with a bit of a heavy heart. And as I was watching, and as I was listening, I could feel my heart healing. It was very powerful. It’s really amazing.
— Virginia Burger

“You know, I actually came here with a bit of a heavy heart. And as I was watching, and as I was listening, I could feel my heart healing. It was very powerful. It’s really amazing. I have done quite a bit of meditation myself. My children are in martial arts, and so it’s something that I invited into my life on a regular basis, but this was extremely powerful,” Burger said, thinking back to the performance she had just seen and its effect on her.

The businesswoman was eager to share her experience of Shen Yun with people she knows, and bring her family along next time.

“This was my first [Shen Yun] performance, and I’ve been meaning to do it for years, but something always came up. And I think this is going to become not only a tradition for myself but also for my family. I’m going to insist that they come every year from now on.”