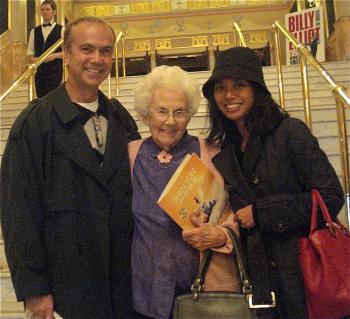 “I thought it was very good, it was very colourful. I really loved all the movement that they created with the sets and the costuming. Very, very nice, very well done,” said Ms. Reyes-Picknell.

“It was very good, I enjoyed it,” she said. “I liked the songs. I liked the background scenery. I thought it was very nice.”

Mr. Reyes-Picknell said the colours were one of the things that struck him most, both in the costumes and backdrops. The graceful flow of the long extended sleeves, called water sleeves in classical Chinese dance, also stood out.

“It is very artistic,” he said.

“Yes, it was great,” agreed his wife. “I really liked that it was very vibrant and it just added something else by having that much movement using the fabric, which I really enjoyed.”

Mr. Reyes-Picknell was also impressed by the classical Chinese dance, an ancient art form showcased by the Shen Yun artists, and especially praised their athleticism and synchronicity.

“It was really well done, very energetic, obviously well thought through. Everybody in time with each other, a lot of jumps, very athletic looking actually,” he said, adding that he found the mix of gymnastics and martial arts in the dances “really quite unique.”

As the show’s hosts explained, all those flips, leaps, and tumbling moves actually originate from classical Chinese dance. But most people know them as acrobatics, artistic gymnastics, and martial arts because those systems borrowed these classical Chinese dance movements and popularized them in recent years.

“I never would have guessed,” said Mr. Reyes-Picknell.