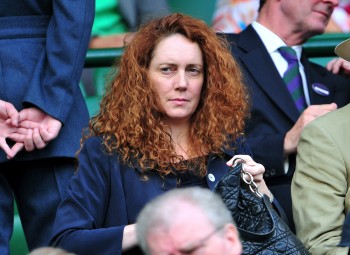 RESIGNED: Chief executive of News International Rebekah Brooks is seen attending the Wimbledon Tennis Championships earlier this month in London. Brooks has resigned from her post at the News Corp. subsidiary.
Business & Economy

Rebekah Brooks, chief executive of News International and one of News Corp. Chairman Rupert Murdoch’s most trusted advisers, was arrested in the United Kingdom. Brooks had resigned from her post last Friday, after shares of News Corp. declined almost 7.2 percent last week on the Nasdaq Stock Exchange in New York. On Saturday, James Murdoch, Rupert’s son, and News International took out full page advertisements in U.K.’s leading newspapers to apologize to the public at large. Also last Friday evening, Les Hinton, who currently leads Dow Jones, publisher of the Wall Street Journal, resigned. Hinton, another one of Murdoch’s confidants, was head of News International from 1995 to 2007, and was its chief executive when the recent News of the World hacking scandal occurred in 2002. According to the Wall Street Journal, which is owned by News Corp., Brooks has not been charged by U.K. authorities.

Pilot unions representing Southwest Airlines Co. and AirTran Holdings Inc. this weekend reached an accord on a combined pilot seniority list, which determines the pay and level of pilots as the two companies work to integrate. Southwest acquired the Orlando, Fla.-based AirTran in May for $1 billion, creating one of the biggest low-cost carriers in the United States. “The unions and company negotiating teams have accomplished a task that is rare in this industry, developing an integrated seniority list and transition plan for our pilots outside of arbitration," said Mike Van de Ven, Southwest Airlines executive vice president and chief operating officer said in a statement on Saturday. The seniority list, which has in the past been contentious during airline mergers, determines pilots’ pay, benefits, and route assignments.

The Canadian Imperial Bank of Commerce (CIBC) last week agreed to purchase a minority stake in asset management firm American Century Investments for roughly $848 million. American Century has more than $110 billion of assets under management and is based in Kansas City, Mo. CIBC, one of Canada’s largest banking firms, bought the stake from JPMorgan Chase & Co, as the Toronto-based firm further diversifies its business from traditional banking in its domestic market. "As boomers continue to advance toward retirement age, the increased demand for personal retirement solutions makes this opportunity attractive,” CIBC CEO Gerry McCaughey said in a statement last Friday.