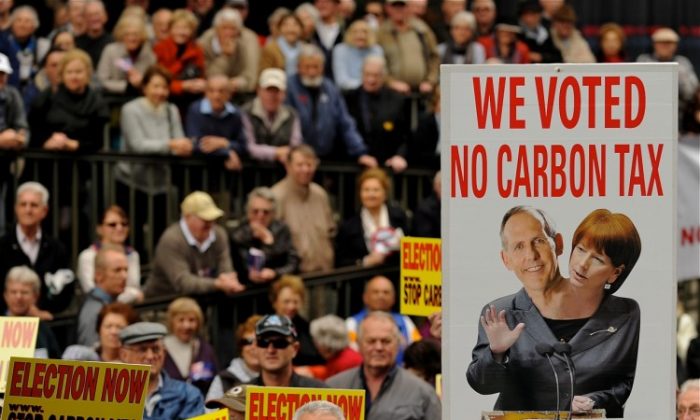 Protesters hold placards during a rally in Sydney on July 1, 2011 against Australian Prime Minister Julia Gillard's plans to introduce a carbon tax. (Greg Wood/AFP/Getty Images)
US

Many small and medium businesses are unaware of the implications of Labor’s carbon tax that will come into effect in July of this year, a major study reveals.

The survey, ‘Australia’s Carbon Tax,’ was conducted by the Australian Institute of Management Victoria and Tasmania (AIM VT), and received responses from 936 business leaders across all industry and Government sectors.

The survey looked at the flow-on impact of the carbon tax, and whether businesses were prepared for it.

Almost 50 per cent of managers were unaware that the carbon tax starts this year, and most were against the tax even though the majority wanted to reduce carbon emissions.

Susan Heron, CEO of AIM VT, said that large businesses are taking steps to reduce their emissions and many are asking their suppliers to do the same.

“We’re seeing many of the larger companies already developing codes of practice–supplier codes of practice–which are asking their suppliers, the small and medium-scale enterprises, to be able to measure and minimise their carbon footprint,” Ms Heron told the ABC.

More major corporations are looking to show the community their sustainability credentials ahead of the carbon tax. By contrast, about thirty per cent of managers surveyed said their organisations had not begun planning for the requirements of the carbon tax or its flow-on impact.

“The trend is the larger the organisation, the more likely it is to have started work preparing for the onset of the tax,” the report said.

Ms Heron believes many small and medium-sized organisations are “not ready” for the flow-on implications of the tax, and that business owners may be able to raise more awareness among their employees by engaging more with their workforce.