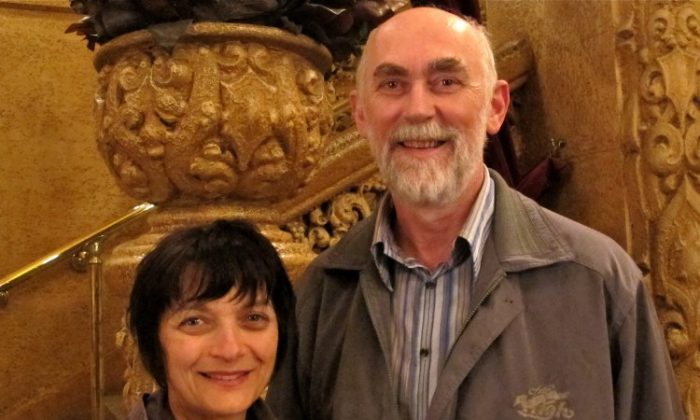 MELBOURNE, Australia—The New York-based Shen Yun Performing Arts company delighted the audience on the second night of it’s Australian tour. The company, which is touring the world complete with its own orchestra, is performing at Melbourne’s beautiful Regent Theatre.

The Simcocks run their own gymnasium, pool and bowling complex and really enjoyed the show. They had been putting up Shen Yun posters at their business premises and decided, “we should find out what it is all about—it is interesting.”

Shen Yun draws on 5,000 years of Chinese culture with myths and legends that extol virtue, filial piety and a belief in the divine. Mr. Simcocks commented “I spent two and a half years in south east Asia … I know a little bit about the myths and legends.”

The Shen Yun Orchestra plays a unique blend of traditional Western instruments with the Chinese pipa and erhu which play the melodies in all-original composition. On the topic of the music he said, “I much prefer the Eastern.

“I’ve always enjoyed Asian music and that’s really what I came to listen to.”

Mrs. Simcock could only find words of praise for the performance. “It was very uplifting, it was just beautiful. Really graceful and beautiful and the colours were absolutely superb. The colours and the costumes were just superb. The dancers were amazing, really amazing. I very much enjoyed it.”

Mr. Simcock felt everyone needs to experience Shen Yun and said he would tell his friends not to miss a show. “It was very very good.”

“You’ve got to find out for yourself” he said, “and that’s the main thing.”