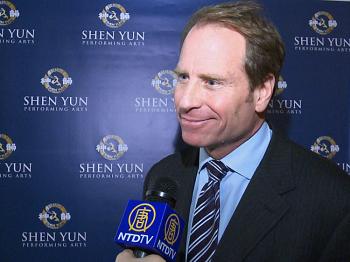 By Epoch Times Staff
Print
NEW YORK—Kent Swig, president of Swig Equities, reflected upon the depth and profundity of ancient Chinese culture displayed by Shen Yun Performing Arts, at its 2011 New York debut performance at the Lincoln Center on Thursday, Jan. 6. Mr. Swig wasn’t sure the audience could grasp the rich meaning, but maintained that Shen Yun did an excellent job of presenting it.

“I thought it was magnificent. … The subtleties and the accents of the meaning are so deep, and with characters and language so strong—to try to convey that to an American audience, I think, especially for the first time, is very, very difficult, which they [Shen Yun] did well,” Mr. Swig commented.

He felt the emcees helped the audience to navigate the array of themes Shen Yun carries, while adding some humor and entertainment between pieces.

While bringing 5,000 years of Chinese culture to an American audience, Mr. Swig noted that Shen Yun comes at a time when America must evaluate its relationship with China.

“China is, you know, one of the oldest countries in the world, and we're in a relationship, so it's [an important] moment in time in our history … and it’s a lot to gather and understand for us,” he said.