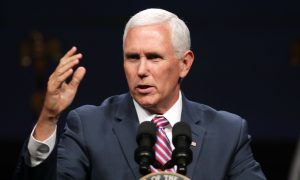 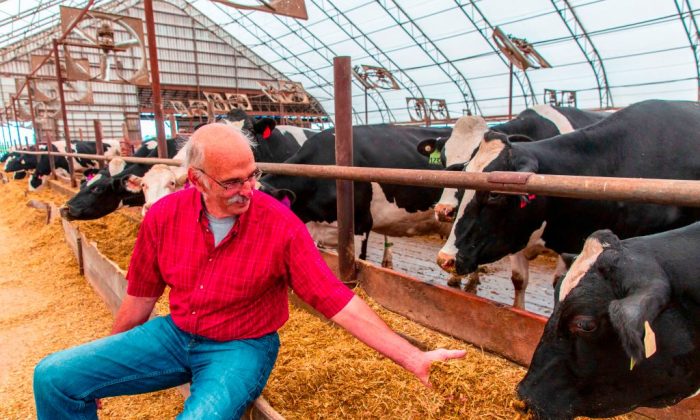 Farmer Bill Sorg with his cows in his dairy farm in Hastings, Minn., on Oct. 3, 2018. (KEREM YUCEL/AFP/Getty Images)
Politics

Business Groups Press Every ‘US Senator and Representative’ to Pass USMCA

WASHINGTON—As Congress heads to a long recess, lobbying efforts for the new U.S.–Mexico–Canada (USMCA) trade agreement are kicking into high gear in Washington.

According to the letter, dated July 23, the new free trade pact is critical to the future of the U.S. economy, as more than 12 million jobs and 120,000 small and medium-size businesses depend on trade with Canada and Mexico. And the two trading partners account for one-third of U.S. agricultural exports.

U.S. Chamber of Commerce President and CEO Thomas Donohue said the letter was sent “to every U.S. senator and representative urging swift action on the USMCA.”

“Since the administration first introduced the USMCA, the Chamber and our coalition partners have held more than 1,000 meetings with members of Congress or their staffs, and we’re just getting started,” he said at a press conference hosted by the Chamber. “We’re going to ramp things up in a major way over the August recess. It’s much more effective to catch these guys and gals at home.”

Donohue also said business groups are ready to provide “political cover” to congressional Democrats who stand up for the deal, adding that there are a large number of new Democratic House members in the top 12 states that would be most harmed by a failure to pass the agreement.

In November 2018, the leaders of the United States, Canada, and Mexico signed the USMCA, which would replace the 25-year-old North American Free Trade Agreement (NAFTA).

Mexico became the first country to ratify the new trade deal, after its Senate approved it with overwhelming bipartisan support on June 19. The agreement now needs to gain legislative approval in Canada and the United States.

According to the National Retail Federation (NRF), the new-NAFTA is a critical issue for the retail sector, the nation’s largest private-sector employer, creating jobs for one in four Americans.

Speaking at the press conference, Matthew Shay, president and CEO of NRF, said that sophisticated, complex supply chain of retail sector would be “dramatically disrupted if we did not move forward with the U.S.–Canada–Mexico agreement.”

“We recognize that things have changed in the past 25 years. It’s time to modernize and make that trade agreement more contemporary. This is the time to do it. And this is the agreement by which to get it done,” he said.

USMCA is “extremely important” for the U.S. dairy industry, according to Michael Dykes, president and CEO of International Dairy Foods Association.

To promote the deal, the agriculture industry is planning to hold a series of rallies across the country and many activities in state fairs, John Bode, president and CEO of Corn Refiners Association, said at the press conference.

“We have a complex story to tell. It’s easy to focus on the top line of the importance of agriculture exports and not look at the more subtle effects in how it is so important for manufacturing,” he said, adding that the agreement had an “impact on many congressional districts that aren’t traditionally thought of as farm districts.”

The agreement faces some opposition in the Democratic-controlled House of Representatives.

Democrats demand stronger enforcement mechanisms on labor and environmental standards in the agreement. In addition, they’ve raised concerns about a pharmaceutical provision, which they argue would raise the prices of vital drugs.

The Trump administration and House Democrats have formed a working group to tackle specific issues that have been raised and they are working directly with U.S. Trade Representative Robert Lighthizer.

According to Kudlow, there is a hope that “she’ll give a green light for a vote in September.”

“And then, we’ll put our full package on the table for legislation and I think we have a very good chance of getting that passed,” he said.