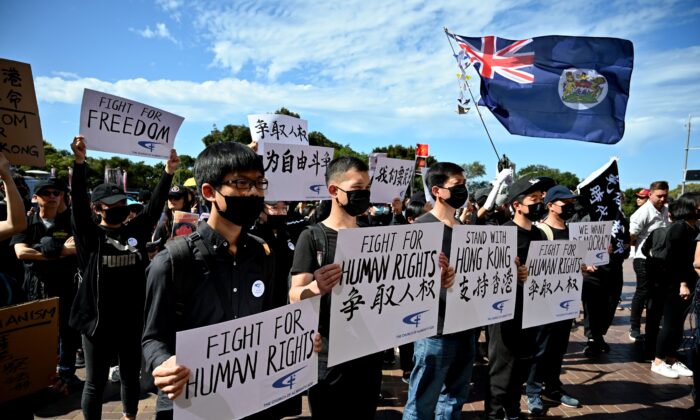 Supporters of the Hong Kong pro-democracy protesters hold placards during a demonstration as part of the global "anti-totalitarianism" movement in Sydney on Sept. 29, 2019. (PETER PARKS/AFP via Getty Images)
Australia

Australian business groups have backed calls to introduce Magnitsky-style sanctions which would target individuals internationally who are involved in human rights abuses.

The Australian Industry Group and Export Council of Australia fronted a parliamentary committee to throw their support behind the proposed new laws, with the understanding that targeted sanctions would likely incur losses for Australian businesses.

“This inquiry on targeted sanctions as a means to address human rights abuses is a worthwhile reminder that there are much bigger issues in the pursuit of profits,” Dianne Tipping, chair of the Export Council of Australia (ECA) said.

“The ECA holds the view that for businesses to be sustainable, it must not only consider profits but people and the planet as well. We believe our members and strategic partners generally share this view also,” she continued.

Tipping said the government would need to engage with industry to discuss possible retaliation and flow-on effects from a sanction, and how businesses could shield themselves more effectively.

The Joint Standing Committee on Foreign Affairs, Defence and Trade is conducting an inquiry into whether Australia should implement laws similar to the Magnitsky Act in the United States.

The Act is named after lawyer Sergei Magnitsky, who exposed major tax fraud committed by Russian officials to the tune of US$230 million. He was subsequently imprisoned, tortured, and died in 2009 after a year in a Moscow prison.

The laws target individuals found to be involved in human rights abuses. Sanctions can include freezing the assets of officials, as well as banning official and family members from traveling into specific countries.

There have been recent calls to implement sanctions in Australia against Chinese officials involved in the Hong Kong protests and violent crackdowns on pro-democracy activists.

Louise McGrath, of the Australian Industry Group (AIG), which represents 60,000 businesses in the country, supported the introduction of Magnitsky-style legislation. But she noted that it would prove a challenge for business owners to discern if a company was owned, or partly owned, by a known human rights abuser.

“It is more complex when there are individual sanctions as opposed to the whole country,” McGrath, who heads industry development and policy at AIG, told the inquiry.

“It is difficult to determine ownership, particularly if, in this situation, there are nefarious actors. They have an interest in hiding their involvement, and I’m not sure an Australian small-medium enterprise would have the resources to really investigate,” she added.

McGrath said it was easier for companies to navigate sanctions when they were implemented against an entire country, rather than against an individual. She highlighted the need for the federal government to educate business owners and managers on the risks of engaging in certain jurisdictions.

Her comments come at a time where the Australian government and business are now reassessing their trade relationships in light of the COVID-19 pandemic, which highlighted weaknesses in global supply chains.

There have been calls for Australia to diversify its trading relationships outside of China, which currently accounts for 27.4 percent of Australia’s trade with the world.