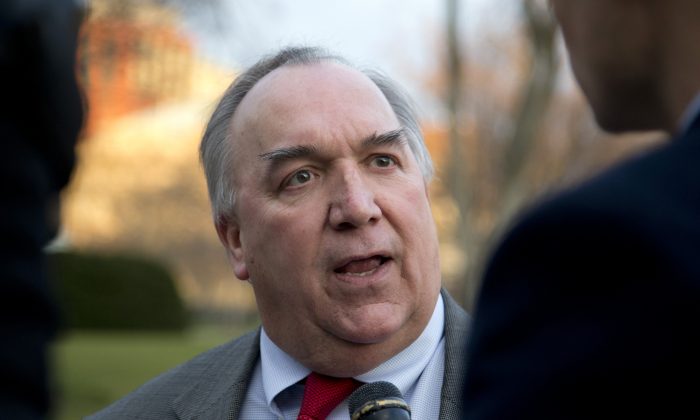 Business Roundtable President John Engler talks with members of the media, in Washington, D.C., on Dec. 19, 2012. Leading business groups, often at odds with President Barack Obama, are looking to give momentum to one of his top priorities before he leaves office: approval of a trade pact linking 12 nations along the Pacific Rim that make up 40% of the world economy. Engler said his organization is hoping Congress will approve the pact before its August recess. (AP Photo/Carolyn Kaster)
Business & Economy

WASHINGTON—Leading business groups, often at odds with President Barack Obama, are looking to give momentum to one of his top priorities before he leaves office: approval of a trade pact linking 12 nations along the Pacific Rim that make up 40 percent of the world economy.

The Business Roundtable, made up of chief executive officers from large U.S. companies, endorsed the Trans-Pacific Partnership agreement on Tuesday. A trade group representing manufacturers did the same Monday.

Their influence could make supporters in Congress more eager to take the agreement up in an election year. Senate Majority Leader Mitch McConnell recently urged Obama to hold off on sending the agreement to Congress before the elections, warning that it didn’t have the votes.

John Engler, president of the Business Roundtable and a former Republican governor of Michigan, said his organization is hoping Congress will approve the pact before its August recess.

“The hope is to send the signal now that we’re getting pretty comfortable with the agreement, and let’s get ready to give it serious consideration,” Engler told the Associated Press.

The trade agreement took more than five years to stitch together. Participating nations would reduce or eliminate thousands of tariffs that apply to foreign-made goods. The agreement also rolls back regulatory requirements, such as the need to establish an office in a particular country or partner with a local entity, in order to access their markets.

We May Have Cinched TPP, but Is US Trade a Lost Cause?

Several presidential candidates in both parties as well as members of Congress have panned the Trans-Pacific Partnership since agreement on the deal’s terms was announced in October. Donald Trump said it’s a “terrible deal.” Democrat Hillary Clinton said “it didn’t meet my standards.”

That’s led to questions about whether Congress would pass the trade pact, even though lawmakers just last year passed legislation designed to speed TPP’s passage without the threat of amendments or filibuster. Support from business groups could ease some lawmaker’s concerns about the political environment.

The trade group representing manufacturers came out with its endorsement Monday. The group has frequently clashed with the Obama administration over new environmental regulations and recently sued to stop stricter limits on smog-causing pollution.

“This is an organization that typically does not endorse priorities of the Obama administration, but I think is a clear example of how even Democrats and Republicans can agree that the Trans-Pacific Partnership would do good and important things for the U.S. economy,” White House spokesman Josh Earnest said on Tuesday

Labor unions have come out overwhelmingly against the trade agreement, saying it will drive wages down, and it’s clear that for Obama to get a legacy-setting victory, he’ll have to rely on the GOP to push the legislation to victory. Engler said he’s confident that the pact would end up getting more votes than the fast-track legislation that passed last year.

Engler said not all members of the Business Roundtable supported TPP, but there was broad consensus.

“We cannot have a robust economy if the goal is to make things here and sell it to ourselves,” Engler said.

“I think we are realistic that there is some deeply entrenched opposition in the Democratic Party to these kinds of measures, but there is bipartisan support for them in the Congress, and we’re looking forward to making that case,” Earnest said.