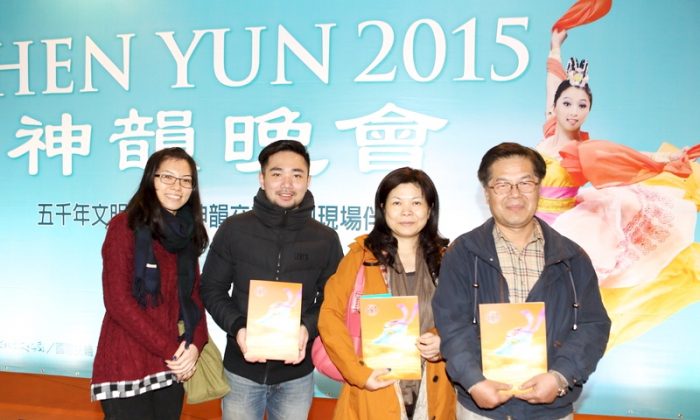 Tsai Chingfa, CEO of Sing For Far Co. Ltd., and his wife, Lin Miao-chuan, who is the president of the company, attend the show presented by Shen Yun Performing Arts New York Company in Taoyuan City on March 27, 2015. (Lin Shijie/Epoch Times)

“I felt the existence of gods, and there are really gods in the human world,” said Tsai Chingfa, CEO of Sing For Far Co. Ltd., after he saw the performance presented on March 27, along with his wife, Lin Miao-chuan, who is the president of the company.

“The momentum throughout the show is what I’d never seen in the past,” he said.

He wanted to share Shen Yun with everyone, “I’ll recommend it to all of my friends. There are thousands of people on my LINE’s directory. I’ll let them know about Shen Yun and the entire divine world I saw tonight, he said.”

“It’s very good. It’s full of Chinese flavor and is spreading the Chinese culture to the outside world. I think it’s a performance with very profound connotations. Through stories and dances, the spiritual concepts are imparted to every audience’s heart.”

Talking about the piece The Fable of the Magic Brush, he noted, “I feel that from the strokes made by the brush, we can tell what is the writer’s heart. Only the compassion from the bottom of our hearts can really help us achieve what we want.”

“Shen Yun is of much benefit to the promotion of Chinese culture. Foreigners can understand the profoundness and broadness of the Chinese culture by watching this kind of program.”

Lin Miao-chuan, president of Sing For Far Co. Ltd., also shared her feeling. She said, “I can only use the word of ‘overwhelming’ to describe tonight’s show. The design of music, backdrops, costumes and performance is very exquisite.”

“Dancers displayed what is deep in their hearts through body language. It’s indeed overwhelming.”

Ms. Pearl O’Connor is an overseas Chinese who has lived in the United States for 31 years. She currently works with a multinational company as global marketing manager. During Shen Yun Performing Arts New York Company’s Taiwan leg of its world tour 2015, Pearl O’Connor happened to return to Taiwan to visit her relatives.

Invited by her friends, she attended the Shen Yun show in Taoyuan.

“Shen Yun’s program is so touching. I feel this show really wonderful. It’s perfect,” she exclaimed.

“Being in the United States for over 31 years, I was amazed to find that we have such a wonderful show depicting traditional Chinese culture. Seeing Chinese culture is been spreading to the world as a whole, I am proud of being a Chinese.”

“The soprano’s performance is very powerful. I really admire her for such a profound foundation.”

Shen Yun features operatic soloists who sing bel canto style in Chinese lyrics—one of the most difficult singing styles to master in the world.

“The performance of erhu is also very touching. It’s indeed not easy to have such a tremendous achievement. She is remarkable. I am very lucky (to see the performance).”

In conclusion, she said, “I would like see it ten more times again.”

“It lets me appreciate an artistic performance with a combination of art, dance and modern technology. I feel very satisfied,” said Huang Jianong, president of IC-Energy Bio Technology.

Amazed by Shen Yun’s high-tech animated digital backdrops that can make the audience have the miraculous feeling of being on the scene in person, Huang Jianong said, “It’s much better than what I had imagined. With the application of high-tech, there are the extraordinary effects that I had never imagined.”

Through its vivid presentation of dance, music, and storytelling, Shen Yun introduces viewers to the spiritual essence of traditional Chinese culture, conveying themes such as benevolence and justice, propriety and wisdom, respect for the heavens, and divine retribution.

“The composition is perfect. Every piece is very unique and very inspiring. They seem to be composed with righteous energy.”

He continued, “The synchronization of each dancing movement, music and musicians is so wonderful that the performance can make the audience have the miraculous feeling of being on the scene in person. Take the little monks for instance (Mighty Monk). It’s very inspiring and educational.”

“Shen Yun has positive meanings on the society. It can empower many people. I appreciate each piece from the perspective of righteous arts. In particular, after working hard, it’s great to appreciate the artistic feast with a relaxing mind.”

‘The music is also very touching’

“Amazing is the only word that I can describe it (Shen Yun),” exclaimed Tseng Zhongwen, president of Blue-Chip Technology Co., Ltd. He explained, “The great unison of the movements in dancing and flipping. It’s indeed not easy. The music is also very touching. The overall audio and visual effects made me feel like joining them.”

Through dance, song, and live orchestral music, the performance brings to life legends and heroes from China’s long and rich history.

Deeply impressed by the humorous and inspiring programs of The Fable of the Magic Brush and Mighty Monk, he said, “It’s great to combine something modern and something traditional.”

“I was truly touched. It’s a precious opportunity for me to watch the show. It’s really very touching.” “With the music, dance and the high-tech animated digital backdrops, the show is indeed marvelous,” he said.