Business Executive: Shen Yun ‘Inspires the compassion within us’ 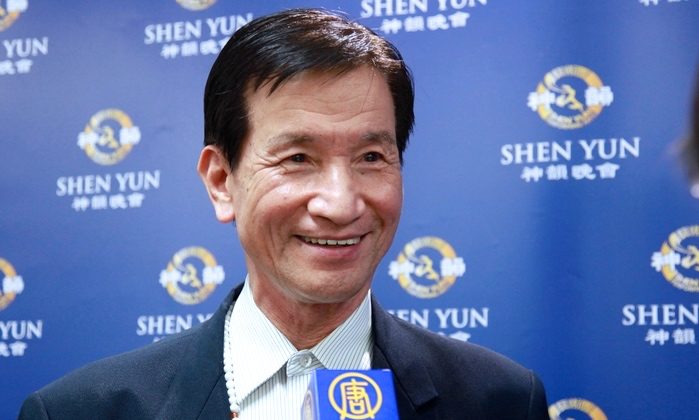 TAIPEI, Taiwan—Running a business is quite an art, and for 75-year-old Wu Chenghung, chairman of MasterMind Consultants Co., he has just been enlightened to the Tao of business management, after watching New York-based Shen Yun Performing Arts on the opening night at National Dr. Sun Yat-sen Memorial Hall.

“The power of compassion is boundless and it can awaken the benevolence within people,” said Mr. Wu.

Shen Yun, at a quick glance, focuses on the richly expressive art form known as classical Chinese dance. But behind the beauty of the performance, Shen Yun also manages to relate the depth of traditional Chinese culture—principles such as benevolence and justice, propriety and wisdom, respect for the heavens, and divine retribution, all come to life, according to Shen Yun’s website.

Mr. Wu continued to say, “Such compassion is beyond any race and beyond the entire world. And it is calling on every human being to be compassionate.”

“Most people usually make them a lesser person by being selfish or loyal to their own group,” explained Mr. Wu. “If a person is able to show compassion, he can be the most well-off leader in his own profession.”

The collaboration between the soloists and their accompanist struck Mr. Liu as perfect examples. “The soloists always bow to the pianist, paying tribute to her support.”

What sets out Shen Yun soloists from others is their use of bel canto technique to sing Chinese text. And these soloists’ ability to do this is unparalleled, says the company’s website.

It inspires the Tao of business management.
— Wu Chenghung, chairman of MasterMind Consultants Co.
“I recommend that every business executives should come to see Shen Yun,” said Mr. Liu.

Mr. Liu said this was his fifth time to come to see Shen Yun, and if time permitted, he would never trade away the time to see the performance for anything else.

“Every year, Shen Yun has new programs. And year in and year out, I have always been so touched by seeing Shen Yun, for it inspires the compassion within us and motivates us to help others.”

“Chinese people have a very rich culture, there is no doubt about that,” exalted Dr. Gerard Berote, president of Evonik Taiwan and General Manager of Evonik United Silica Industries, who was seeing Shen Yun for the second time.

Dr. Berote came with his wife, son, Peter, and daughter-in-law, for the fourth performance in Taipei on April 5.

“Being respectful, being courteous and be kind, these are all values that should be adopted by everyone,” reflected the son Peter.

“The values are good values for everyone. It’s not just Chinese values, but it is the values in the whole world.”

“Compassion,” the wife of Dr. Berote quickly pointed out as another value that had resonated with her.

Then male dance pieces also made an impression on Dr. Berote. “You sort of put graciousness into the martial art and that was nice.”