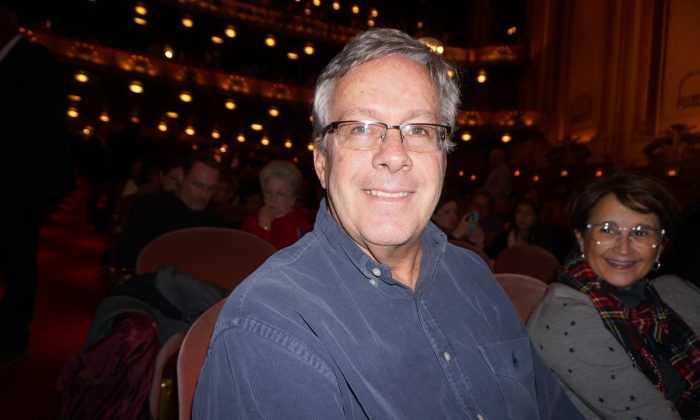 CHICAGO—Business executive Jeff Welch has been to China many times for work, but watching Shen Yun Performing Arts enhanced his understanding of its rich culture and history.

Welch attended the performance with his wife, Carmen, at Civic Opera House in Chicago, Illinois, on Dec. 29. The New York-based company recently started its 2019 world tour, where six equal-sized companies are set to perform in over 100 cities across four continents.

Shen Yun Performing Arts’s mission is to revive 5,000 years of Chinese culture through music and dance.

Welch, who is Senior Vice President of Development at restaurant chain Potbelly Sandwich Shop, said he enjoyed the ethnic and folk dances.

“It was very interesting, very beautiful,” he said.

He was particularly drawn to the ethnic dance piece titled “Charming Ladies of the Yi,” which featured traditional dance and costumes from Yunnan province in Southwestern China. The dancers don colorful wide skirts and engage in energetic movements, revealing the lively spirit of the Yi ethnic group.

Shen Yun dancers train not only in ethic and folk dance from China’s 50-plus ethnic groups, but also in classical Chinese dance. Classical Chinese dance is a craft that has evolved over thousands of years, and sits besides ballet as one of the most complex and rigorous dance systems in the world. Dancers are required not only to master a range of high-level physical movements and expressions, including difficult tumbling techniques, but also achieve a spiritual requirement in the form of cultivating “yun” or inner bearing. It it this feature that separates classical Chinese dance from other art forms.

This spiritual element of classical Chinese dance is also a reflection of the spirituality deeply imbued within traditional Chinese culture. Over thousands of years, Chinese people believed in the divine, or heaven, and that one must live one’s life in harmony with divine principles. These beliefs permeate the teachings of Buddhism, Taoism, and Confucianism, forming the cornerstone of traditional Chinese thought and values.

Welch said he appreciated the spiritual element of Chinese culture.

“I know that the Chinese have a very rich culture, very spiritual culture,” he said.

“It was too bad it was interrupted with the Communist regime.”

The Chinese Communist Party (CCP) disrupted traditional Chinese culture when it took control of China in 1949. The party declared a war on tradition in its numerous political campaigns, which culminated in the Cultural Revolution in the 1960s to 1970s. The Cultural Revolution sought to systematically destroy China’s ancient religions and cultures, and replace it with an atheist culture prescribed by the CCP.

CCP repression of tradition continues to this day in the form of the persecution of religious groups in China, including of spiritual discipline Falun Gong, also known as Falun Dafa.

Falun Gong consists of meditation exercises and ancient teachings centered around the principles Truthfulness, Compassion, and Tolerance. The practice rapidly grew in popularity in China the 1990s, resulting in an estimated 70 million people practicing by 1999. Threatened by this population, the CCP launched an expansive crackdown of the practice the same year, which saw practitioners of Falun Gong arrested, imprisoned, tortured, and even killed for their beliefs. The persecution persists to this day.

For Welch’s wife, Carmen, what’s happening in China hit close to home. She and her family left Cuba to the United States to escape communist oppression.

“I think its shame that the communist government destroyed the beauty that is in the Chinese culture,” she said.

“All the color, and the life, and it’s just like [what] happened in Cuba, they like to destroy what is beautiful because they have a fear.”

Carmen said the story presented of a young woman thrown into prison for her belief in Falun Gong moved her the most.

While the story broached a heavy subject-matter, Carmen said it ultimately provided a message of hope.

“[The story revealed] the value the importance of deity, of God,” she said.

With reporting by Stacey Tang and Cathy He.