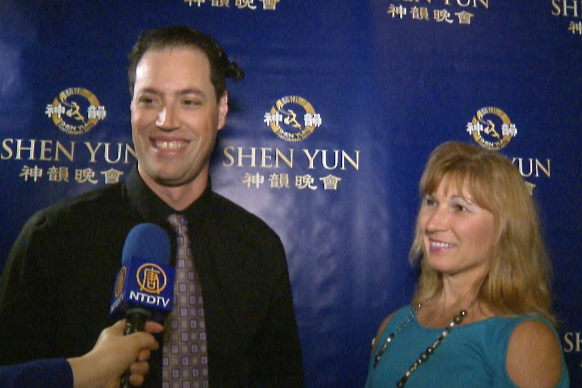 Ralph Morales and his companion during the intermission of Shen Yun Performing Arts at the California Center for the Arts, Escondido, Feb. 28. (Courtesy of NTD Television)

ESCONDIDO, Calif.—Ralph Morales, a business director at Hewlett-Packard, was enthralled after seeing a sold-out showing of Shen Yun Performing Arts New York Company, Feb. 28, at the California Center for the Arts, Escondido.

“The show was just amazing. I mean the costumes, the colors, the vibrancy, and even the dancers. To train for so long and be able to do that is just phenomenal,” he said.

This was Mr. Morales’s first time watching Shen Yun, a New York-based, non-profit classical Chinese music and dance company that tours the world for six months out of the year and has reached millions of people since it was established in 2006.

Shen Yun’s mission is to revive traditional Chinese culture, which has been assailed by decades of communist rule in China.

The company website describes the performance: “Through the universal language of music and dance, Shen Yun weaves a wondrous tapestry of heavenly realms, ancient legends, and modern heroic tales, taking you on a journey through 5,000 years of Chinese culture.”

Indeed, Mr. Morales’s comments about the costumes, colors, and dancers are common among audience members.

Dozens of male and female dancers perform a variety of vignettes throughout the performance, and each piece includes different costumes, all handmade, ranging from those of emperors and generals to the everyday clothing of commoners.

Shen Yun’s website explains the costumes: “The colors are brilliant and display a splendid spectacle.” The objective of Shen Yun costume artists is to create “an authentic presentation of the attire that comes from China’s divinely inspired traditional culture, and a consummate stage effect.”

Another source of rich colors is the digital projection that creates an enormous backdrop for each piece, placing the audience in the midst of ancient legends and lore.

Mr. Morales was especially impressed by the piece The Steadfast Lotus, a contemporary story about faith and courage amidst persecution.

His companion said she enjoyed Delicate Beauty of the Han, in which, according to the program, “gentle maidens in silken skirts” wearing long, flowing “water” sleeves “spin and twirl in symphony.”

She was also impressed by the combination of dance and music.

“The athleticism of it, and the strength needed, and the choreography and songs with the music is wonderful,” she said.