'It’s something that has been developed not over hundreds of years, but over millennia.' 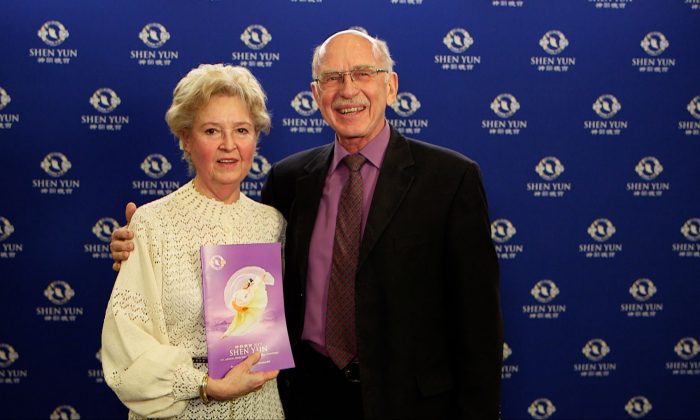 Orest Nowakiwsky and his wife, Irene, at the National Arts Center in Ottawa, Canada, on Dec. 27, 2018. (NTD Television)

Nowakiwsky, president and CEO of Memcare Corporation, saw the performance at National Arts Center in Ottawa, Canada, on Dec. 27.

“The show was beyond my expectations in terms of technical execution as well as visual presentation,” said Nowakiwsky.

Shen Yun Performing Arts kicked off the Canada-leg of its 2019 world tour by performing to a full-house at the National Arts Centre, in which audience gave the performers a standing ovation. The company’s mission is to revive traditional Chinese culture and history through Chinese dance and music.

Nowakiwsky said the performance was illuminating for him, being someone who was not familiar with Chinese culture.

“This was an eye-opener in terms of seeing the various expressions, movements, and the performance,” he said.

“So I think it does open one’s eyes to the rich culture that China has acquired over the years.”

Classical Chinese dance is complex dance form, developed over thousands of years, comprised of strict physical and inner components. The dance style itself is a facet of traditional Chinese culture, a culture deeply intertwined with spirituality and belief in the divine.

Nowakiwsky heads an international business development consulting company that focuses on developing opportunities in Eastern Europe. He has more than 30 years of experience in this field and currently serves the boards of several private technology companies.

The consultant, who is of Ukrainian descent, said he particularly enjoyed the athletic and dynamic movements, some of which reminded him of traditional dances from his home.

He was also impressed by the animated backdrop that projected vivid settings from a range of time periods and regions in China.

“The background projection is something that I haven’t experienced,” Nowakiwsky said.

“The combination of projected imagery and dancers creates an almost artificial reality of what we are experiencing.”

Culture Needs to be Preserved

“I think Shen Yun offers … an opportunity for the general public to witness what China has to offer,” he said.

“As a result, it only enriches our experience.”

Traditional Chinese culture is depicted by Shen Yun on stage by the telling of stories through dance. It is also shown through ethnic and folk dances, and classical Chinese dance pieces. These scenes provide a glimpse into a civilization that is thought of as divinely-inspired. Indeed China was once called “Shen Zhou,” or land of the divine.

“The various dances, and stories portrayed in the dances, are … legendary and are passed on from generation to generation and have meaning as it did before.” Nowakiwsky said.

“It’s something that has been developed not over hundreds of years, but over millennia,” he said.

“I think it’s worth preserving and passing on to the next generations.”

With reporting by NTD Television and Cathy He.