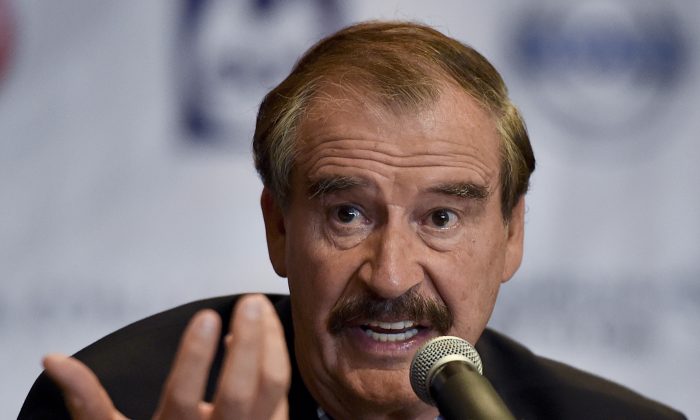 Former Mexican President Vicente Fox (2000-2006) during a briefing with international press at a hotel in Mexico City on Sept. 22, 2014. (Yuri Cortez/AFP/Getty Images)
The Reader's Turn

Business-Class Ideologues Tell Us What Aspirations to Have

A reader weighs in on Vicente Fox’s opinions on business. Vicente Fox is a Mexican businessman and former president of Mexico.

Vicente Fox can be proud of Mexico’s recent progress, though the gangs are still running wild. But insofar as NAFTA  [North American Free Trade Agreement] may have helped Mexico, it has hurt the United States, except for a few members of the business class.

When Fox says, “I think we should forget . . . about ideologies,” he blithely ignores his own upper-class ideology: “I am always pro-market. I’m always for freedom in the economy and I am always for a good solid public policy structure to motivate and incentivize businesses.”

This implies that business should be exempt from paying normal taxes, rents, and wages.

Mr. Fox says nothing about the majority, only those with his kind of ambition. Consider the social bias of him telling 70,000 kids a year at Centro Fox that being a migrant or a construction worker is bad, while being president or an architect or a great violin virtuoso is good.

This is reminiscent of former U.S. presidential candidate Jack Kemp saying at his national convention how sad it was that a black kid in Chicago told him his ambition was to be a truck driver.

A lot of people, Mexicans and Estadounidenses, who are stuck in unemployment or low-pay, low-respect service jobs would love to be truck drivers or construction workers. Drivers can make a decent or a good living and they are free of a lot of the [problems] that a president or an architect or a virtuoso has to put up with.

Not everyone elevates the business class, which after all has retreated in large part from social responsibility and gratitude by producing a lot of toxic junk and working around the clock to pollute the air and water, deplete the world’s aquifers, censor the news, drive up the cost of healthcare and education, and deny that there are social classes.