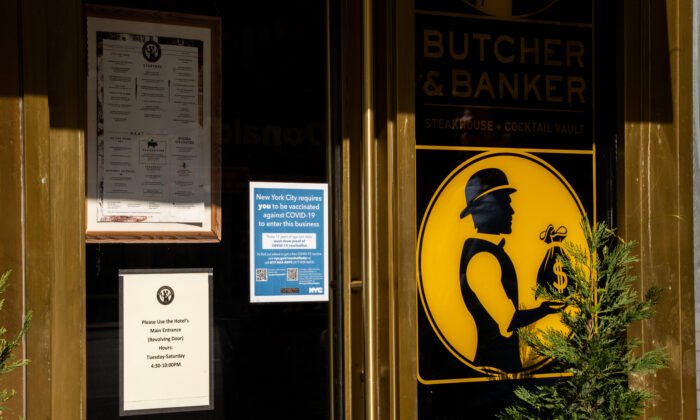 Business activity in the United States in September grew at its slowest monthly pace in 12 months, with supply chain hold-ups and capacity shortages hampering growth.

Data firm IHS Markit said on Sept. 23 that its flash U.S. Composite PMI Output Index (pdf)—which tracks the manufacturing and services sectors—retreated to a reading of 54.5 in September. That’s a drop of one percentage point from August’s reading of 55.5 and the lowest level in 12 months.

“The pace of U.S. economic growth cooled further in September, having soared in the second quarter, reflecting a combination of peaking demand, supply chain delays, and labor shortages,” Chris Williamson, Chief Business Economist at IHS Markit, said in a statement.

Hiring difficulties weighed on business activity, with firms reporting only a slight rise in employment for the second month in a row.

Trucking issues and capacity shortages led to a substantial increase in lead times and what the report described as “one of the greatest deterioration in vendor performance on record.”

Cost pressures were historically high in September, as firms faced higher prices of input materials and greater wage demands. The rate of cost inflation was the highest in four months and the second-highest on record.

The consequence was “yet another month of sharply rising prices charged for goods and services as demand outpaces supply, and higher costs are passed on to customers,” Williamson noted.

New order growth fell to its lowest reading since August 2020.

Weighing on the drop in the combined output index was a particularly weak showing in services. The IHS Markit services business activity gauge fell to 54.4 in September, a 14-month low.

There was a slowdown in new business growth in the services sector in September, with the rate of expansion falling for the fourth month in a row due to weaker demand and ongoing COVID-19 concerns.

“The slowdown was led by a cooling of demand in the service sector, linked in part to the Delta variant spread,” Williamson said.

Factories, which unlike services saw a robust increase in new business, fared better overall. The manufacturing PMI index fell 0.6 of a percentage point to 60.5 in September, a 5-month low.

Manufacturers were also able to hire at a faster pace than service sector businesses, though hiring challenges translated into a sharp rise in backlogs of work.

Pressure on operating capacity contributed to a record-high rise in outstanding business in manufacturing, and the second-fastest in over 12 years of data collection for the combined factory and services measure of activity.