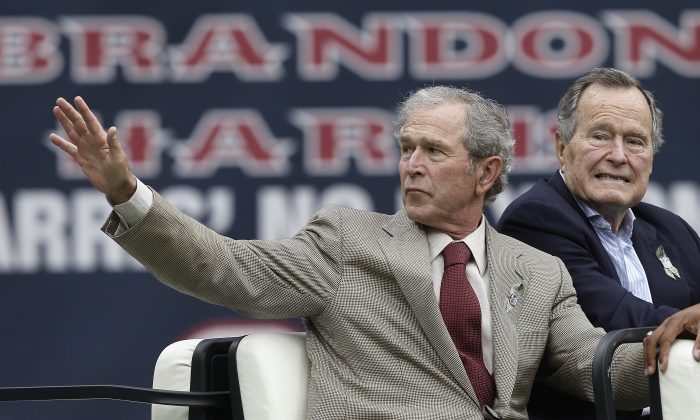 Bush Sr. and W. Bush Are Not Attending the Republican National Convention This Summer

George Bush Sr. and George W. Bush have both said that they’re not going to attend the Republican National Convention in July when Donald Trump is expected to be nominated.

“He does not intend to attend,” George W. Bush’s personal aide Freddy Ford said in a statement to Politico.

In a separate statement, George H.W. Bush spokesman Jim McGrath said, “At age 91, President Bush is retired from politics. He naturally did a few things to help Jeb, but those were the ‘exceptions that proved the rule.'”

It will be the first time that the George H.W. Bush will abstain from endorsing the GOP candidate for president since his presidency.

In 1996, the former president stumped for Bob Dole who ran against the incumbent Bill Clinton.

“I’ll do anything Sen. Dole wants me to do—I’ll campaign for him,” Bush Sr. said. “My heart lies at this level, the Dole level.”

For the 2000 and 2004 election cycle, the elder Bush endorsed and campaigned for his son.

Both former presidents endorsed John McCain in 2008 and Mitt Romney in 2012, with the elder Bush at 87 giving Romney glowing praise:

“Barbara and I are very proud to fully and enthusiastically endorse and support our old friend Mitt Romney,” Bush 41 said in a 2012 CNN interview. “He’s a good man, he’ll make a great president, and we just wish him well.”

Romney is also going to skip going to the convention after criticizing the nominee throughout the primary season:

“Governor Romney has no plans to attend convention,” one of Romney’s aides told The Washington Post.

In the primary season, Romney was one of the most critical voices of Trump, calling Trump “a phony” who is “playing the American public for suckers,” a man whose “imagination must not be married to real power.”

“His is not the temperament of a stable, thoughtful leader,” Romney declared.

He was also critical of Trump’s business ventures, which the Republican nominee responded to by bringing an array of steaks, wine, and magazines as proof of his lasting brand.

Donald Trump responded to news of Romney’s absence with a shrug of the shoulders saying that he thought it would be hard for the ex-nominee to be there.