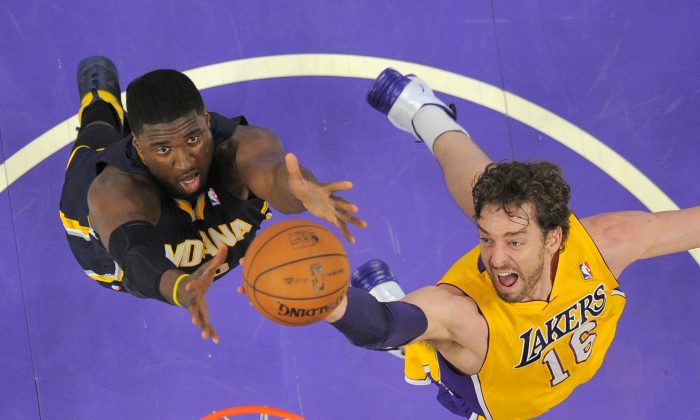 Pau Gasol of the Los Angeles Lakers battles for a rebound with Roy Hibbert of the Indiana Pacers in a file photo. (AP Photo/Mark J. Terrill)
NBA

The Chicago Bulls are pursuing a number of possible additions, but one that’s now off the board is Carmelo Anthony.

The small forward is going to inform the New York Knicks that he’s returning sometime this week, according to multiple reports.

However, the team has snagged one of its top choices–Pau Gasol.

“It hasn’t been easy. After meditating it a lot I’ve chosen to play with the Chicago Bulls, Gasol announced via Twitter.

“Looking forward to this new chapter of my career.”

The San Antonio Spurs, Oklahoma City Thunder, and Miami Heat were among the other teams pursuing Gasol.

Meanwhile, the first deal that the Bulls complete may be a buyout with the 23-year-old Nikola Mirotic, whom they drafted in the first round in 2011.

“According to a league source, a deal with the 23-year-old Spanish forward is “almost done” and because Mirotic’s $3-million buyout to Spain’s Real Madrid (of which the Bulls can contribute $600,000) can be paid over time, his annual salary might not significantly affect the franchise’s salary cap,” reported CSN Chicago.

“That’s important moving forward, as the Bulls have to plan for defensive-minded swingman Jimmy Butler’s potential contract extension at the outset of the regular season.”

Lance Stephenson is being linked to all kinds of teams, and now he’s been linked to the Bulls.

Alex Kennedy of Basketball Insiders reported this week that the Bulls have expressed interest in Stephenson, citing sources.

Stephenson turned down a five-year, $44 million offer from the Indiana Pacers because he feels he’s worth more than that.

The Boston Celtics, Lakers, and Dallas Mavericks are among the other rumored pursuers of Stephenson.

Stephenson is obviously not as good as Anthony but is one of the top shooting guards/small forwards left on the market.