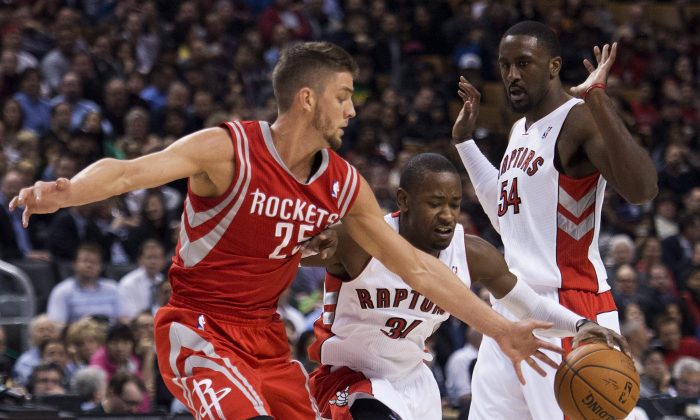 The Chicago Bulls are still in the running for Carmelo Anthony, despite reports from multiple ESPN reporters that the Los Angeles Lakers have risen to become the number 1 contender with the New York Knicks.

Bulls writers and others are pointing out that the reported interest by Anthony and his group in the Lakers doesn’t seem to be extending past ESPN, and the network is also admitting that the Bulls and other suitors haven’t been informed that Anthony has narrowed down his choices.

Anthony visited Chicago, Dallas, Houston, and Los Angeles last week. Some consider Chicago the best fit for a championship run this season, partly because it’s in the weaker Eastern Conference. The Rockets may have the best roster on paper but are in the much stronger Western Conference.

“Wednesday’s Texas trip featured the Rockets wooing him with a talented roster in Houston and the Mavericks keeping it all business in Dallas, but Chicago, partly because of the perception of the Eastern Conference offering a much easier path to the NBA Finals, is seen as the most logical, if not financially lucrative landing spot,” reported CSN Chicago.

Anthony is expected to announce his decision sometime this week.

If Anthony doesn’t go to the Bulls, then the team is planning to pursue backup options such as restricted Rockets free agent Chandler Parsons or unrestricted free agent Paul Pierce. Marc Stein of ESPN reported these possibilities in late June. Another option, according to David Aldridge of NBA.com, is Oklahoma City Thunder veteran Caron Butler.

Other free agents on the Bulls radar include Pau Gasol and Lance Stephenson. They’re also looking at re-signing D.J. Augustin and/or Kirk Hinrich.