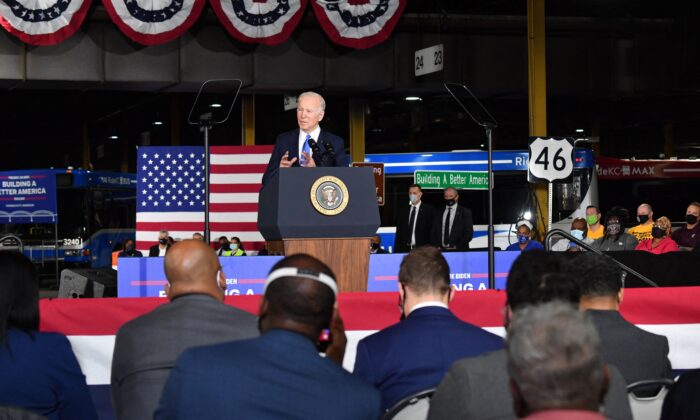 Your decision on Feb. 4 to remove tariffs on bifacial solar panels imported from China is a death sentence for U.S. solar panel producers, and a giant step toward building American industry down instead of back as you claim you wish to do.

Let’s go back in history a bit. Photovoltaic technology was born in the United States in 1954 when Daryl Chapin, Calvin Fuller, and Gerald Pearson developed the first silicon photovoltaic cell at Bell Labs. In 1973, the University of Delaware built the first photovoltaic-powered home, named “Solar One.” In 2000, First Solar of Perrysburg, Ohio, built the world’s largest photovoltaic manufacturing plant, and astronauts at the International Space Station began installing its solar panels in space.

From the 1960s to the ’80s, U.S. producers dominated the global market with a 95 percent market share. Then, the market environment changed dramatically. High U.S. interest rates and currency manipulation by some foreign governments drove the value of the dollar sky-high, thereby dramatically increasing the prices of U.S.-made panels compared to those made in Japan, Taiwan, and Germany. Still, at the end of 1997, American-made panels accounted for 45 percent of the global market.

In the first decade of this century, China targeted solar panels as a critical product for production in China. While heavily subsidizing Chinese solar panel producers, Beijing also managed its currency to maintain a low-value exchange rate with the U.S. dollar, directed panel buyers in China to buy Chinese, and imposed high tariffs on imported panels. It also sometimes used forced labor in the production of Chinese panels.

The result has been a continuing loss of market share by U.S. producers and increasing market dominance by the Chinese makers, who now enjoy about a 55 percent global market share, including an 80 to 90 percent share of the U.S. market.

A big downside of the Chinese panels is that their production uses an enormous amount of coal-fired energy that creates large greenhouse gas emissions and thereby adds to global warming.

During the Trump administration, the United States imposed high tariffs on imported panels, creating an opportunity for increased sales by U.S. makers as well as for a reduction of global greenhouse gas emissions. The result has been a rapid increase in sales by the American producers over the past three years, significant job creation, and a reduction in global greenhouse gas emissions since U.S. producers largely use natural gas-, wind-, and solar-generated electricity instead of the dirty, coal-fired generation in China.

When you arrived in Washington in 2021 as the new U.S. president, you called for “building back better.” You said you wanted to repair U.S. infrastructure, reduce greenhouse gas emissions, and start making things in America again. In response to the recent shortage of semiconductors and to the loss of global market share of U.S. semiconductor makers, you asked Congress to pass a bill that would direct about $52 billion to the U.S. semiconductor producers to assist their efforts to compete better with Taiwanese, Chinese, South Korean, and Japanese makers. Indeed, as I write, the U.S. House of Representatives has just approved that bill.

That passage is a good thing for America. Yet on the same day, you announced that you are removing tariffs on imports of Chinese-made solar panels. This makes no sense. It will make America more dependent on China at a time when you say our foreign policy is aimed at becoming less dependent on a country that denies freedom of speech and rule of law, and that commits genocide against its own Uyghur population.

The question is: why?

The answer is easy: old-fashioned lobbying and political donations. The Solar Energy Industry Association is dominated by companies that install but don’t make solar panels. They want to buy cheap panels from China while charging the same price as for the installation of U.S.-made panels. This association has somehow convinced you to remove the tariffs.

Only two parties will benefit from the removal—China and the panel installers. Buyers will receive a less expensive installation quote and U.S. producers will be driven out of business with a substantial loss of jobs.

Even sadder is that the tariff removal will substantially increase global greenhouse gas emissions. First, China’s producers use mostly coal-fired electric generators. Second, the transport of panels from China to the United States involves the movement of ships, airplanes, and trucks. All of these together create about 14 percent of total global greenhouse gas emissions. The cost of these emissions is never included in the price of the panels or of their installation. It should be. If it were, no one would buy panels from China.

But at a moment when it’s ever clearer that America would be better off being less reliant on China, not only are you not “building back better,” you are making us more reliant on China.

This makes no sense. Please, Joe. Say it ain’t so.