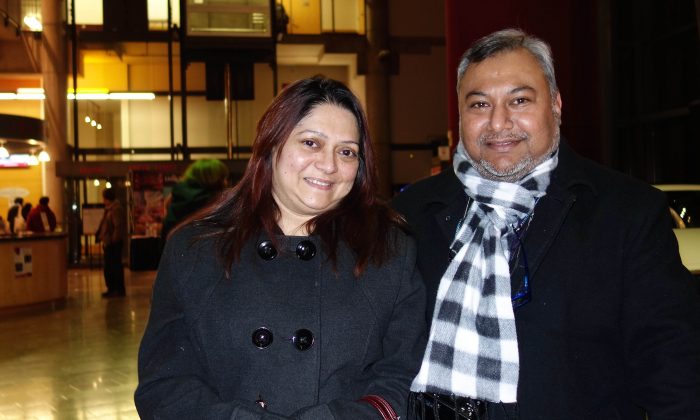 MISSISSAUGA, Canada—Entrepreneur Ejaz Chowdhury and his wife Marina Karim were among the appreciative full-house audience on opening night attending Shen Yun Performing Arts on Jan. 16 at the Living Arts Centre.

They are of Indian background, and the renowned classical Chinese dance production was something new for them. But when it comes to showcasing artistic excellence and preserving one’s cultural heritage, such as is the mission of Shen Yun, it is the same aspiration for people of every culture, Mr. Chowdhury said.

“It’s very entertaining, and I’ve seen the level of the performance each artist has shown here, it’s great, it’s great.”

“It’s really amazing, and especially the dress, and their dance, their performance—really good,” Ms. Karim said, especially praising the costumes as well as the choreography.

At the heart of every Shen Yun performance is classical Chinese dance, rounded out by Chinese ethnic and folk dances.

Enhancing each performance are the more than 400 handmade and often hand-stitched costumes that are all-original designs, with their brilliant colours and intricate details.

Mr. Chowdhury, who is a builder with his own business, Paramount Dream Homes, had high praise for the coordination among the dancers and the talent he saw on stage.

He noted that it exemplifies the virtues that have been developed and passed down over thousands of years in the history of China.

Indeed the mission of Shen Yun is to revive the traditional Chinese culture of 5,000 years that has been all but nearly lost under six decades of communist rule.

It is a culture whose essence is defined by principles such as benevolence and justice, propriety and wisdom, and respect for the heavens, as explained on the Shen Yun website.

“It’s teamwork, like the performance shows, the teamwork in how they have been doing it for many, many years, how they coordinated with each other,” he said.

“So a lot of learning comes out of it, a lot of skill is involved in it, and they have developed [these skills] since thousands years back.”

There is value in keeping these traditional principles alive in modern society, Mr. Chowdhury said.

“To keep the authenticity … for any culture, you should keep your history intact,” he said.

“That helps you going forward. [Future] generations can understand how rich they were, how talented their people were, and where they have to go.”

For Ms. Karim, the performance left her “feeling good,” she said.