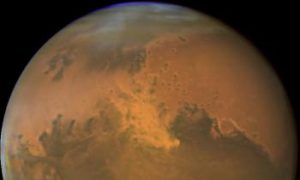 Was Mars Once a Land of Lakes?
0
Share Now
FacebookTweetParlerEmail
Copy Link
Beyond Science

A few days ago, NASA confirmed the probable existence of ancient lakes on Mars, suggesting the planet was once capable of supporting life.

Some are heralding another discovery they believe is proof the Red Planet once hosted not only various organisms but an advanced civilization.

Scott C. Waring of ufosightingsdaily.com recently shared images of a Buddha statue, proclaiming , “…should be enough to convince the United Nations that intelligent life once existed on Mars.”

There are a bevy of objects seen on Mars that have not been acknowledged as proof of developed people and societies, so it is unclear if the powers that be will rush to embrace this particular one.

Experts took a pass on Marshenge, an arrangement of blocky rocks that is arranged in a way that is not entirely unlike Stonehenge. They also apparently chose to ignore the large, floating spoon spotted on the planet not long ago.