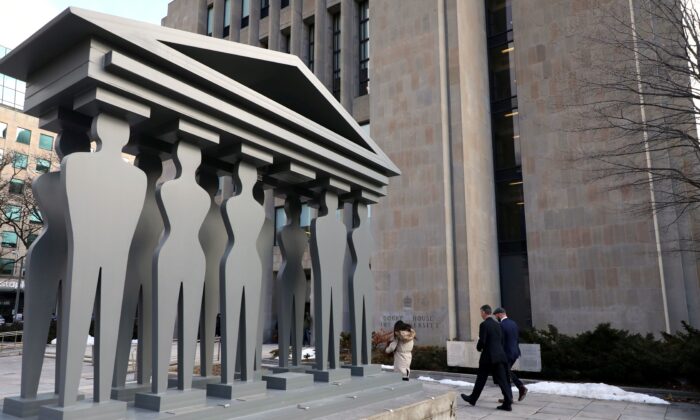 The Ontario Superior Court building in Toronto on Jan. 29, 2020. (The Canadian Press/Colin Perkel)

A year ago in The Epoch Times, I described how Canadian courts were embracing the official COVID narrative. In cases across the country, judges have given deference to governments and public health authorities rather than scrutinize the rationales for COVID measures and mandates. Some have gone so far as to take “judicial notice”—finding facts without evidence—that the situation was as public health officials and government agencies represented it to be.

For instance, in September 2021 Justice M.T. Megaw of the Saskatchewan Court of Queen’s Bench granted an order allowing the father of a 12-year-old girl to vaccinate his daughter over her own objections and those of her mother. The judge concluded “without the necessity of any specific proof” that the COVID-19 virus posed a serious and significant health risk to children like the 12-year-old, and that the Pfizer vaccine was safe and effective for her to receive.

Other courts have done similarly. COVID vaccines are safe and effective, government policies during COVID have been sensible and justified, and the rationales for these measures are not to be questioned: These have become judicial orthodoxies. Courts have been determined not to get into the weeds on COVID, and judicial notice has been their “out.” The science of lockdowns, quarantines, masking, and vaccine mandates has yet to be subjected to full scrutiny in a Canadian legal proceeding. The hegemony of the COVID regime in the courts has seemed almost complete.

But not quite. Over the past year, a few judges have pushed back.

In August 2022, almost a year after the case in Saskatchewan, in a case with similar facts, the Ontario Superior Court came to the opposite result. A father sought an order requiring his ex-wife to vaccinate his 12-year-old daughter against the daughter’s wishes. In dismissing the father’s request, Justice J.C. Corkery concluded that requiring the girl to be vaccinated against her will would put her at risk of serious emotional and psychological harm and would have irreversible physical consequences, since vaccination cannot be undone. In the absence of expert witnesses, he declined to simply rely on government assertions and take judicial notice of medical facts about the vaccine.

“I am not prepared to take judicial notice of any government information with respect to COVID-19 or the COVID-19 vaccines,” Corkery’s decision reads. “Absent judicial notice, there is certainly no presumption that it is in a child’s best interest that she be vaccinated.”

In refusing to take notice of the alleged safety of the vaccine, Corkery relied upon earlier decisions of two of his Superior Court colleagues. In December 2021, in a family law judgment not dealing with COVID, Justice J. Breithaupt Smith described how courts taking judicial notice of the safety and efficacy of vaccines are in error.

According to the Supreme Court of Canada, Breithaupt Smith explained, courts may take judicial notice only of facts that are clearly uncontroversial and beyond reasonable dispute. Disputed scientific facts, such as whether a medication is safe and effective, are neither. Like all alleged facts, they must be proven through witnesses who are subject to cross-examination by the other side. While lay witnesses testify on what they saw (“the car was grey”), or what they did (“I stopped the car at the intersection when the light turned red”), expert witnesses are permitted to state their professional opinion on matters within their expertise, as long as the facts upon which the opinion is based are also independently established.

However, some facts are so obvious and uncontentious that having to prove them would be silly and a waste of judicial resources. The sky is blue. A statute with Royal Assent has been validly passed. Of such facts judicial notice may be taken. But judicial notice is not meant to apply to the very issues that are in dispute, such as whether a COVID vaccine is safe for a child to take. “A statement concerning the safety and efficacy of any medication in the prevention or treatment of any condition is, in and of itself, an opinion,” Breithaupt Smith’s judgment reads. “Judicial notice cannot be taken of the opinion of any expert or government official that a medical treatment is ‘safe and effective.’”

In February 2022, in another family law dispute, Justice A. Pazaratz dismissed a father’s motion to require his 10-year-old and 12-year-old children to receive a COVID vaccination over their wishes and the objections of their mother. Pazaratz, adopting Breithaupt Smith’s reasoning, said that taking the government’s version of things as the truth was not only contrary to the law but foolhardy.

“The list of grievous government mistakes and miscalculations is both endless and notorious,” he wrote, citing Thalidomide, internment camps, residential schools, and forced sterilization of Inuit women among the examples, “Catching and correcting those mistakes is one of the most important functions of an independent judiciary.”

On their own, these decisions will not turn the ship around. They do not overrule other decisions at the same or higher level of court and will not constitute binding precedents on those courts. Nevertheless, that there are judges with courage and clear thinking willing to call out the errors of the prevailing approach is no small thing.

Perhaps there may yet be a judicial renaissance on coercive COVID measures, and their scientific rationales will eventually receive the scrutiny that they deserve.