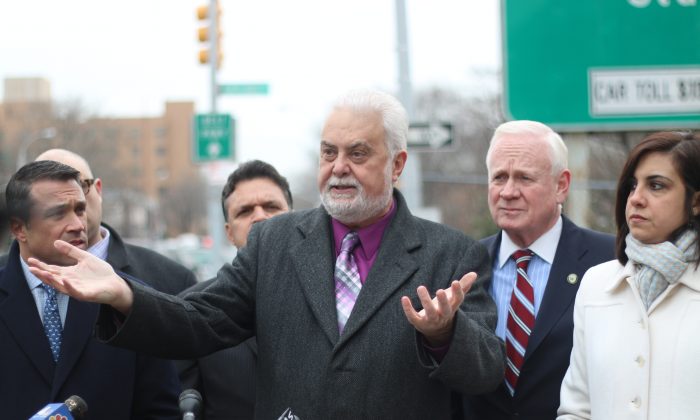 NEW YORK—Brooklynites already receive a 58 percent discount on Port Authority operated bridges that run from Brooklyn to New Jersey, as long as they use a bridge more than three times in a month. Now officials are asking for the same discount to be applied to the Verrazano-Narrows bridge.

The Verrazano bridge is operated by the Metropolitan Transit Authority (MTA). The bridge only charges a toll in the Staten Island-bound direction, so drivers traveling from Staten Island to Brooklyn do not pay a toll. Brooklyn residents who travel to Staten Island pay a fee of $10.66 with a EZ pass, and $15 in cash. State Sen. Martin Golden, Assemblywoman Nicole Malliotakis, and other officials representing Brooklyn, kicked off a campaign for a toll discount which can be funded by the MTA and/or the state government.

“This Verrazano bridge makes $250 million profit a year. Instead of reinvesting that money into the bridge or using that to reduce the toll, they are using it to subsidize other parts of the transit system, so really that’s where the unfair burden comes in,” said Assemblywoman Nicole Malliotakis.

“They’re making a 76 percent profit annually on this Verrazano bridge. There is room to be able to lower that toll,” she added.

“We’re talking about thousand upon thousands of people, and they need that reduction. We’re asking the state to do what’s already in effect by the Port Authority to put that in effect here at the Verrazano bridge,” said State Sen. Martin Golden.

One Brooklyn resident said that the discount would be an immense help. Marcel Vantuyn lives in Brooklyn and his daughter goes to school in Staten Island. He drives her there on a daily basis and the commute costs him about $3,500 per year.

“It turns out that we cross the bridge about 300 times a year on average. Effectively, that just adds a whole other monthly bill. I would say at this point it’s equivalent to a car payment,” said Bay Ridge resident Marcel Vantuyn.

With a 58 percent discount, the fare for Brooklyn drivers would become $6.30. Assemblywoman Malliotakis said that the cost for the discount can either be covered by the Verrazano’s profits or additional state funding.

“[The MTA] really should be looking to reduce that profit that they’re making and rebate the money to the drivers and lowering that toll, but we could also be looking at it from a state budget standpoint and seeing if we can get more money that way,” she said.

“Transit does need to be funded in some way, but it does not have to come out of the pockets of toll payers who are geographically trapped by this bridge and other bridges,” said MTA board member and Staten Island attorney Allen Cappelli.

In February, Gov. Andrew Cuomo announced that he would reduce the one way toll on the Verrazano bridge for Staten Island residents with EZ passes from $6 to $5.50.

Currently Staten Island residents pay $6.36 per trip, and if they take more than two round trips a month, the fare is reduced to $6.

The discount is expected to begin April 1st and will save Staten Islanders approximately $14 million, a cost that will be split between the state and the MTA, the operator of the Verrazano bridge.