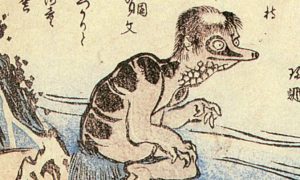 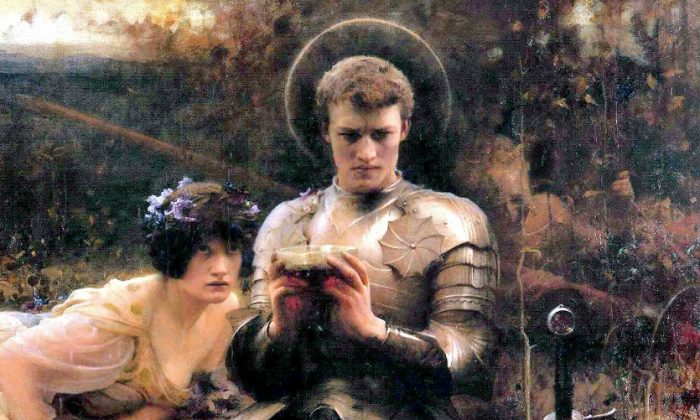 Sir Percival is depicted holding the Holy Grail as a devil disguised as a woman tries to tempt him, in this painting by Arthur Hacker, painted in 1894. (Wikimedia Commons)
Beyond Science

Over the centuries, many have indeed gone looking for the legendary cup and there are many theories as to when and with whom it may or may not have ended up. But, a raid of The Crown Inn Pub in Herefordshire, England, earlier this month added a bit more modern intrigue the grail legend.

According to PBS, 12 British officers raided the building, which dates back to the 15th century, peering under floor boards and using fiber optic cameras in search of a cup some say may be the Holy Grail of legend.

The grail candidate is called the “Nanteos Cup,” after the Nanteos Mansion in Wales where the cup resided until 1952. The mansion was used by Christian monks during the 16th century as a place of refuge after King Henry VIII dissolved England’s monasteries.

King Arthur’s knights, gathered at the Round Table to celebrate the Pentecost, see a vision of the Holy Grail. This scene is depicted in a 15th century manuscript of “Lancelot and the Holy Grail.” (Wikimedia Commons)

The cup went missing this past July and is believed stolen. The cup disappeared from the care of Fiona Myers, a descendent of the family who once owned the Nanteos Mansion. She is said to have loaned the cup to an ill woman who was using it for its alleged healing power.

The police received a tip that the cup had been seen at the pub, but they did not find it there.

Before the cup’s alleged abduction, it was inspected by scientists. According to these experts, the cup is most likely not the one used by Jesus, as it dates from a few centuries after the believed date of the last supper. In addition, the cup is not made from olive wood, the wood expected to be used for a cup of that period.

Two employees of of the museum and a guest (R) view what was known as the goblet of the Infanta Dona Urraca—daughter of Fernando I, King of Leon from 1037 to 1065—in the museum of the Basilica of San Isidoro in Leon, northern Spain on March 31, 2014. Some historians now say it may be the Holy Grail. (Cesar Manso/AFP/Getty Images)

In March, two historians announced they had found the Holy Grail in Spain. An onyx chalice stored in the Basilica of San Isidoro in Leon, Spain, was on display as property of the 11th century Queen Urraca. Margarita Torres, a history professor at the University of Leon, and art historian Jose Ortiza del Rio identified it as the legendary grail after reading medieval Egyptian documents referring to the chalice of Christ.

Torres and Ortiza del Rio say Muslims stole the chalice in Jerusalem and gave it to Christians in Egypt. It was sent as a gift to King Fernando I of Castile in 1050, as thanks for aid during a drought. By this time it had been adorned with jewels and medieval decoration. Fernando passed it on to his daughter, Queen Urraca. The historians say they have dated the cup, showing it was made between 200 B.C. and 100 A.D., though they could not track the first 400 years of its history and are thus unable to definitively prove it is the Holy Grail.

Other Grail Leads in Britain

The Nanteos Cup isn’t the only object in Britain that many believe could be the Holy Grail. In Glastonbury, legend holds that Joseph of Arimathea buried the grail deep within the hillside of Glastonbury Tor for safekeeping. The legend continues that a spring welled up from the hillside, flowing through the grail and stained red from the blood of Jesus. A spring of red water is indeed found there, but today the red color is explained by the presence of Iron oxide in the Glastonbury soil.

The summit of Glastonbury Tor. On the hillside is a spring of red water, which, according to local legend, flowed through the Holy Grail buried there. (Tony Grist via Wikimedia Commons)

Another British grail legend involves the Marian Chalice, and it writes out Joesph of Arimathea entirely. It suggests that Mary Magdalene caught the blood of Jesus in a cup during his crucifixion and later stored that cup and the body of Jesus in Joseph’s tomb. The cup was later excavated from his tomb and taken to Rome. When Rome was sacked by Visigoths in 410, the cup was taken to Britain.

At this point the grail legend parallels aspects of the King Arthur legend, with Payne Peveril (corresponding to Percival in the Arthurian legends) being the first of many grail guardians. Legend traces the movement of the Marian Chalice from Whittington Castle, Shropshire, to Alberbury Priory, to a hiding place inside a statue of St. John that stood in Hawkstone Park. A small Roman onyx scent jar was discovered there in 1934, which many believe to be the Marian Chalice.

Sir Percival is depicted holding the Holy Grail as a devil disguised as a woman tries to tempt him, in this painting by Arthur Hacker, painted in 1894. (Wikimedia Commons)

Another legend claims the Roslin Chapel grail is the Holy Grail. During the Crusades, the monastic order of the Knights Templar discovered treasure, including the legendary relics from the Temple of Solomon hidden a thousand years earlier. The most precious of all the artifacts among the recovered treasure was the grail, which was brought back to Scotland and entrusted with Henry Sinclair, Earl of Orkney, according to the legend. It remained entrusted with the family until the Roslin Chapel was constructed in 1446 where it was encased in the very ornate Prentice Pillar. The Roslin Chapel was built as a reproduction of the original Temple of Solomon.

Roslin or Rosslyn Chapel, founded in the early 15th century. The Holy Grail is said to be buried here. (Ronnie Leask via Wikimedia Commons)