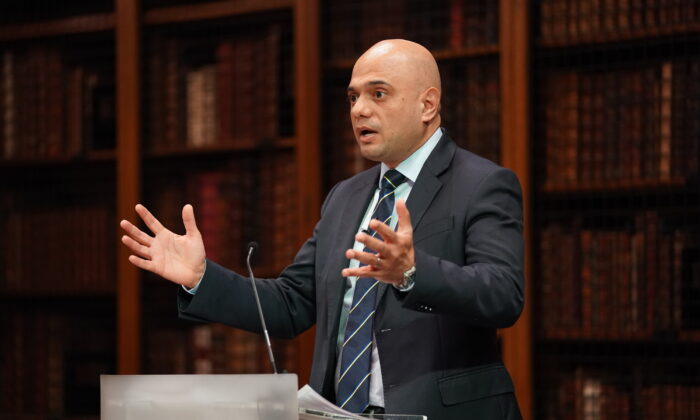 Health and Social Care Secretary Sajid Javid delivers a speech on health care reform in the Dorchester Library at the Royal College Of Physicians, London, on March 8, 2022. (Kirsty O’Connor/PA)
UK

Health Secretary Savid Javid has said that the word “women” should not be removed from ovarian cancer guidance, after it was found that the NHS had “desexed” some of its main sites on female medical conditions, by using “inclusive” gender-neutral language that excludes the words “female” and “women.”

The health secretary told Sky News, “You won’t be surprised to know that as a health secretary, I think that your sex matters, your biological sex is incredibly important to make sure you get the right treatment, the very best treatment.”

The Times of London reported on Tuesday that the main NHS web pages on ovarian, womb, and cervical cancers no longer referred to women on some of the main pages.

For example, the womb cancer page used to say that “cancer of the womb (uterine or endometrial cancer) is a common cancer that affects the female reproductive system. It’s more common in women who have been through the menopause.”

Now it says that “most womb cancer usually starts in the lining of the womb (endometrium), this is also known as endometrial cancer.”

For the ovarian cancer page, the site used to say that “ovarian cancer mainly affects women who have been through the menopause (usually over the age of 50), but it can sometimes affect younger women.”

Now the guidance says that “ovarian cancer affects the 2 small organs (ovaries) that store the eggs needed to make babies. Anyone with ovaries can get ovarian cancer, but it mostly affects those over 50.”

Javid said that he hadn’t seen the Times of London report. “Well, look, I haven’t seen that particular report, but I have heard of instances like that and I don’t think it’s right,” he said.

He added that he was “looking into this” and used prostate cancer as an example of a disease that can only affect “those that are biologically male” and that it was “important to talk about women when talking about cervical cancer … so people know what you are talking about.”

“It’s important that when messaging is given to people for cancers that words like women and men are used,” Javid said.

“There are many different trusts and I want to listen to why someone might have taken a different approach, I don’t just want to assume, but I think I’ve made my views clear on this,” he said.

He added, “I know there’s some sensitivity around this language, but we have to use common sense and use the right language so that we can give people the best possible patient care.”

A spokeswoman for NHS Digital told The Times of London on Tuesday: “It is not correct to say that there is no mention of women on the ovarian, womb, and cervical cancer pages. We have updated the pages as part of our routine review of web pages to keep them in line with the best clinical evidence, and make them as helpful as possible to everyone who needs them.”